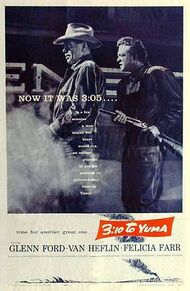 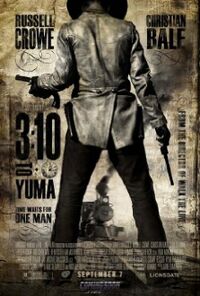 Determined Homesteader Dan Evans is going to lose his farm. A bad drought worsened by his creditor redirecting the river that ran through his farm makes it nigh impossible to pay his dues, let alone afford his ill son's medication. His luck is about to change though, but for better or worse is hard to tell. Not far away, stage coach robber Ben Wade is pulling off another successful heist against a bank coach. Dan and his sons are witness to it, and manage to walk away alive and with Wade generously compensating the loss of some cattle during the heist. Dan and his sons rescue one of the pinkertons (law men) that survived and take him to town.

Wade goes to the nearby town to rest before regrouping and setting off again, but the local sheriff sets an ambush and they capture him. This was the easy part however. Since the sheriff needs volunteers to escort Wade to Yuma for a trial, Dan volunteers in order to get the money to pay for his farm. The way to Yuma will be filled with dangers, not just from Wade's gang, led by deadly Dragon Charlie Prince, but also Indians, old enemies of Wade who are out to kill him, and perhaps most dangerously, Magnificent Bastard Wade himself.

A 1957 film starring Glenn Ford and Van Heflin, adapted from a short story by Elmore Leonard (his first ever published work, in fact). Remade as a 2007 film, which can be considered a Reconstruction of soapy Westerns that, along with Appaloosa, depicts realistic life in the old west.

For those curious, the original film shares many tropes in common with the remake. However, due to the remake being an Adaptation Expansion instead of a straight-up remake, there are few tropes the original has that the remake does not (unless noted).

The original movie was named to the National Film Registry in 2012.

Ben Wade: Byron's like a song with only one note in it. You ever read a book in your life besides The Bible, Byron?
Byron: No need.