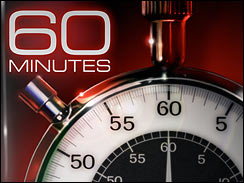 The longest-running Prime Time News show, 60 Minutes has been shown every Sunday night on CBS since 1968. Known for the concluding segment in which Grumpy Old Man Andy Rooney used to complain about whatever ticked him off this week until his October 2011 retirement and passing in the next month.

It also has that name with the Running Time in the Title.

60 Minutes remains a bastion of actually good reporting in the increasingly-barren wasteland of US network TV news. Aside from the debacle with Bush's service record (though that involved former sister program 60 Minutes II and not the mother show; II got canceled after awhile) and a story about the tobacco industry tamped down by CBS's outgoing owner which inspired the 1999 film The Insider, it would be hard to accuse it of reporting on anything but real, worthwhile news, unlike most of the rest of the US Prime Time News shows. They've been particularly clear in not reporting on anything even remotely resembling a Missing White Woman Syndrome story, which the others are positively flooded with. About the only thing to criticize is Product Placement interviews involving authors of books released by sister book publisher Simon & Schuster and some shilling of actors doing films for CBS Films, but that's about as bad as it gets (and in the former case is very welcomed by book fans).

Outside of the trademark ticking stopwatch, the program has absolutely no Background Music of any form, which is a rarity in any genre of American television, where BGM is an absolute requirement to set a scene or tenor, letting the stories stand solely on the reporting and interviews.

It has seasons like most of American television, so in the off season they air partial re-runs, where they take articles run before and modify them slightly, perhaps slightly updating them (usually in the intro and ending commentaries). However, despite being in a really crummy timeslot for decades (7 PM Sundays) the only time it was pre-empted for sports was when CBS had the Olympics. If an NFL game runs late, 60 Minutes is shown in its entirety and the rest of the Prime Time lineup timeshifted back as long as necessary, though in some time zones this isn't necessary, as football is usually over by the time the show is supposed to start. Toronto's CIII-TV used to simulcast the US version of 60 Minutes, which caused scheduling to break badly whenever the US feed was delayed by sports running into overtime. It no longer carries the programme. Australia (since 1979) and New Zealand (since 1993) have their own localised versions of 60 Minutes, which are produced independently.

Tropes used in 60 Minutes include:

Retrieved from "https://allthetropes.org/w/index.php?title=60_Minutes&oldid=1911697"
Categories:
Cookies help us deliver our services. By using our services, you agree to our use of cookies.