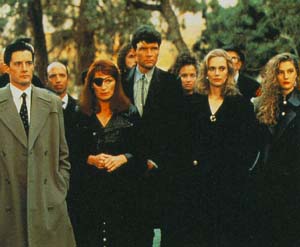 An early-nineties television series created by David Lynch (responsible for such films as Blue Velvet and Eraserhead) and Mark Frost (co-writer of the Fantastic Four film). It paved the way for shows like Northern Exposure, which stole its Northwest locale and some limited quirkiness. The series also heavily influenced a surprising number of video games, most obviously Deadly Premonition and Puzzle Agent. It had a little bit of everything (see Soap Opera and Mix and Match). Ostensibly a hybrid Crime-Time Soap / Detective Drama, it quickly took off for parts unknown with a pervasive supernatural element that turned it partly into an Occult Detective story that smacked of slightly off-kilter Magic Realism.

The series starts off with the discovery of a murdered teenage girl, Laura Palmer. This event in turn leads to the eccentric Special Agent Dale Cooper visiting the town as part of his hunt for a serial killer. Although the murder investigation wraps up partway through season two, a new foe from Cooper's past keeps the plot moving until the notorious "How's Annie?" Cliff Hanger ending of season two (and in fact the series). The 1992 movie Fire Walk With Me mostly wraps things up. The show features a rather large and colorful cast with about as many subplots as there are characters, and the story contains quite a few examples of Red Herring Twist and Powers That Be.

In October 2014, David Lynch announced that Twin Peaks will be returning to TV in 2016 on Showtime. In late 2015, the premiere was pushed back to 2017. As of this writing, filming has been completed on the series, which was shot continuously from a single long shooting script; while it was initially described as a nine-episode limited series, the final episode count will not be determined until editing is complete. The so-called "Season 3" was written by Lynch and co-creator Mark Frost and directed entirely by Lynch.

This show's production and television run provided examples of:

Retrieved from "https://allthetropes.org/w/index.php?title=Twin_Peaks&oldid=1799778"
Categories:
Cookies help us deliver our services. By using our services, you agree to our use of cookies.