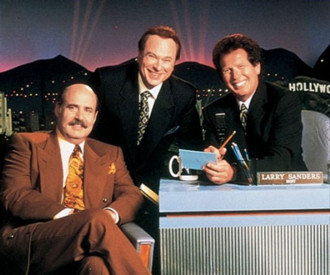 Live on tape from Hollywood, it's the Larry Sanders Show!

Superb late-night talk show satire, written by and starring the late Garry Shandling as the titular Larry Sanders, a self-centred and neurotic late-night talk show host á la David Letterman or Jay Leno. Adopting a curious format, the show was split between Larry's talk-show (recorded on videotape) and the back-stage exploits (recorded on film). This effortlessly presented the contrast between the professional showbiz world of the show and the petty, snide backstabbing environment behind the scenes, along with Larry's effortlessly smooth, constantly grinning and in-control stage persona and his insecure, paranoid off-camera personality. The contrast was helped by numerous real-life stars who agreed to play as 'guests' on Larry's show, including Robin Williams, Ellen DeGeneres, Roseanne Barr and David Duchovny, whose man-crush on Larry became a running gag.

Present to help (or hinder) Larry was his ultra-aggressive and tough-as-boots, but loyal, bulldog of a producer, Artie (Rip Torn), and Larry's pompous and egotistical sidekick, "Hey Now!" Hank Kingsley (Jeffrey Tambor), who despite his genial and bumbling stage presence was if anything even more paranoid, insecure and pathetic than Larry himself.

Tropes used in The Larry Sanders Show include:
Retrieved from "https://allthetropes.org/w/index.php?title=The_Larry_Sanders_Show&oldid=1689592"
Categories:
Cookies help us deliver our services. By using our services, you agree to our use of cookies.