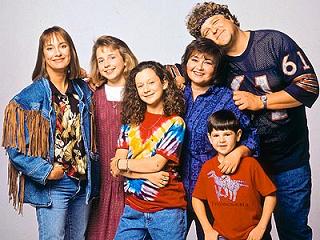 Popular sitcom that ran from 1988 to 1997 on ABC. It focused on the trials of the working-class Conner family. There was mother Roseanne (Roseanne Barr); father Dan (John Goodman in the role that made him famous); preppy daughter Becky (originally played by Lecy Goranson, and taken over by Sarah Chalke -- one of the most famous instances of The Other Darrin outside of Darrin himself); sarcastic daughter Darlene (Sara Gilbert); son D.J. (Michael Fishman); and Roseanne's younger sister Jackie (Laurie Metcalf).

Probably the Trope Codifier for the Dysfunctional Family on American TV. The Conners were generally stable but were still prone to dealing with domestic arguments, problematic neighbors, daughters who seemed to like bad boys and taking in a kid whose home life was far worse than theirs. The Healey brothers, Mark (Glenn Quinn) and David (Johnny Galecki) were added to the show as long time boyfriends to Becky and Darlene, eventually marrying them. The show was also noted for a welcome subversion to the Ugly Guy, Hot Wife rule.

A revival/Sequel series -- which almost entirely Retconned the tenth season out of existence -- premiered in 2018 to a short but tumultuous run. After Roseanne Barr was fired for an offensive tweet in early 2018, the revival was canceled, and a true Sequel series centered around Darlene, The Connors, followed it.

Tropes used in Roseanne include:
Retrieved from "https://allthetropes.org/w/index.php?title=Roseanne&oldid=1928211"
Categories:
Cookies help us deliver our services. By using our services, you agree to our use of cookies.