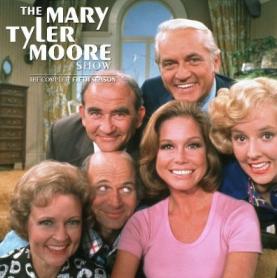 The show was famous for the quality and depth of its writing, particularly the attention and care given to supporting characters such as Lou Grant, Rhoda Morgenstern, Murray Slaughter, Ted Baxter, and Phyllis Lindstrom. Even Sue Ann Nivens, the Happy Homemaker, who could have been played as merely two dimensional, was given some measure of depth.

The show was also one of the first to feature a single woman as the central character, and focus on her career rather than her love life. As originally scripted, Mary was to have been recently divorced. This was considered too controversial in 1970 (plus, in a case of classic Executive Meddling, network brass was afraid viewers would think that Moore's Dick Van Dyke Show character, Laura Petrie, had gotten divorced from Rob), so her Backstory was changed to one of rebuilding her life after a broken engagement.

The Mary Tyler Moore Show was the first series produced by MTM Enterprises (founded by Moore and then-husband Grant Tinker), which would be responsible for several of the most popular and acclaimed shows of the '70s and '80s. The show won 29 Emmy Awards (a record that held until Frasier won its 30th in 2002) and a Peabody Award, and spun off three other series: Rhoda, Phyllis and Lou Grant (the latter being one of the few instances where a comedy series spawned a drama).

One of its episodes, "Chuckles Bites the Dust", is widely considered to be one of the funniest sitcom episodes ever.

One of the many tropes it established was the recurring gag about Mary's disastrous parties. Friends similarly has built continuity around its Thanksgiving episodes, and Buffy typically had ruinous birthdays.

According to a book by J. Michael Straczynski, if a writer watches this show and Fawlty Towers, they will have had the best possible grounding in how to write comedy.

Ultimately The Mary Tyler Moore Show is best remembered for the depth and humanity of its characterizations, while never sacrificing the funny. Oh, and the hat-throwing scene in the intro.

Tropes used in The Mary Tyler Moore Show include:
Retrieved from "https://allthetropes.org/w/index.php?title=The_Mary_Tyler_Moore_Show&oldid=1881126"
Categories:
Cookies help us deliver our services. By using our services, you agree to our use of cookies.