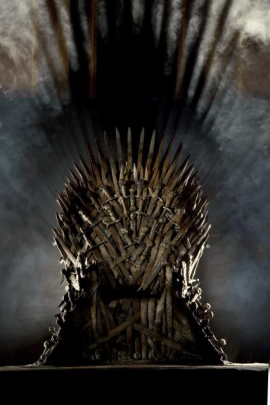 "When you play the game of thrones, you win or you die."

Game of Thrones is an HBO series based on George R. R. Martin's epic fantasy series A Song of Ice and Fire.

In the land of Westeros, the seasons last for years. The story opens with the threat of a long winter fast approaching. The Hand of the King, Jon Arryn, has unexpectedly died. King Robert ventures north to Winterfell to name his old friend, Eddard Stark, his new Hand and second in command. Despite the concerns of his wife, Catelyn, Eddard reluctantly accepts his new title out of duty. Whilst there, he uncovers evidence that Jon Arryn was murdered--and that the hand behind Arryn's death may now be poised to strike the king. It Gets Worse from thereon.

The series was adapted for television by David Benioff and Dan Weiss. In describing the series to newcomers, Benioff jokingly called it "The Sopranos meets Middle-earth". The producers and Martin have a tentative plan for eight seasons, with one of the larger middle books being split into two. Contingency plans for a Gecko Ending are also in place in case Martin hasn't finished the last two books before the series catches up.

HBO's official site, featuring behind-the-scenes teasers, can be found here, whilst the main fan nexus is Winter Is Coming.

Now has an episode recap guide.

Tropes used in Game of Thrones include:

Rape Is a Special Kind of Evil: especially if you are deflowering your bride on your wedding night, as Ramsey to Sansa.

Retrieved from "https://allthetropes.org/w/index.php?title=Game_of_Thrones&oldid=1747022"
Categories:
Cookies help us deliver our services. By using our services, you agree to our use of cookies.