A Song of Ice and Fire/Characters/Other Major Houses

This is a listing of member of the major houses that appear in the Fantasy series A Song of Ice and Fire that do not have enough members or tropes to justify their own page (yet). Visit here for the main character index. 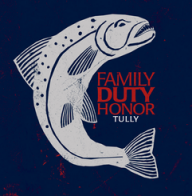 Lords of the Riverlands from their fortress of Riverrun. Their current head, Hoster Tully, has three children: the two daughters Catelyn and Lysa, who married Eddard Stark and Jon Arryn, and the son Edmure, who will succeed him when he dies (which is going to be soon; he starts the series on his deathbed). They ally with the North during the War of the Five Kings. Their house words are "Family, Duty, Honor." Their members tend to have fiery red hair and their sigil is a leaping silver trout. 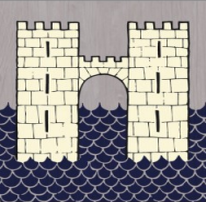 Powerful bannermen of House Tully, and Lords of the Crossing. Their seat, the Twins, are the only way to cross a major river, which has made them very rich. Their patriarch is Walder Frey and his progeny are weaselly and scheming just like him, holding intense grudges and high ambition. Although not a traditional "Great" house, they rise in power during the civil war, though they are always disliked amongst their current allies. Lord Walder Frey is over 90, currently on his 8th wife. With over 25 legitimate sons and countless daughters, bastards, and grandchildren, he brings new meaning to the Big Screwed-Up Family trope. Their members tend to have a weaselly appearance and their sigil is two towers. 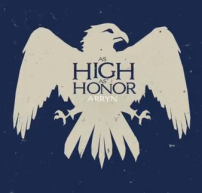 Lords of Mountain and Vale, their seat, the Eyrie, is built at the top of a mountaintop so steep that (primitive) elevators are used to ascend to it. Their most recent lord, Jon Arryn, was foster-father to two young boys of other families - Eddard Stark and Robert Baratheon. Jon, a Straight Man of the highest caliber, later served as Robert's Hand Of The King until his death prior to the opening of the series. His young trophy wife, Lysa Arryn, has since returned to the Vale with her husband's palsied, pansied little son Robert. Their house words are "As High As Honor" and their sigil a moon and falcon.

Catelyn: Lysa was never brave. When we were girls together, she would run and hide whenever she’d done something wrong. Perhaps she thought our lord father would forget to be wroth with her if he could not find her. It is no different now. She ran from King’s Landing for fear, to the safest place she knows, and she sits on her mountain hoping everyone will forget her. 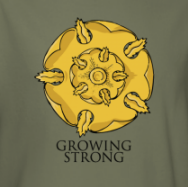 The Lords of the Reach from their flowery seat at Highgarden. The Tyrells are a rich and powerful house, and the Reach is the largest of the six southern kingdoms, but their patriarch Mace Tyrell is a fat, greedy buffoon. His eldest son Willas is a bookish guy who was crippled in a tourney; his middle son, Garlan, is a Happily Married Knight in Shining Armor; his youngest son, Loras, the Knight of Flowers, is so hot that Even the Guys Want Him; and his daughter, Margaery, is a very shrewd young lady. Though they started out the series by allying with Renly, they eventually went over to House Lannister after Renly was killed, marrying Margaery to Joffrey. The poor girl's been married to several guys: first Renly Baratheon, then the aforementioned Joffrey, and later Joffrey's brother Tommen. This has made her one of the pawns in the game of thrones... And one of the contenders for Cersei's place as Queen. Something that Cersei takes VERY seriously. Their house words are "Growing Strong" and their sigil a golden rose. 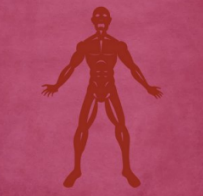 "Aye, but he thought us friends. A common mistake."
—Ramsay Bolton

Based in the appropriately named Dreadfort, the Boltons are largely the Token Evil Teammate and Psycho for Hire of House Stark and their most powerful bannermen. They have a morbid practice of skinning their enemies and displaying all their skins in the Dreadfort, a castle on the brinks of the Weeping Water with legendary torture chambers. The "Leech Lord" Roose Bolton is the head of the house, which seems to consist only of him, his bastard son Ramsay, and his overweight wife Fat Walda. During the war, Roose betrays the Starks and arranges the Red Wedding with the Freys, where he murders Robb personally. They have icily pale eyes and their sigil is a red flayed man on a pink field, and their house words (as revealed by GRRM) are, "Our blades are sharp."

Originally a Southon House located in the Reach, several centuries ago, the Manderlys were driven from their seat and were taken under the protection of House Stark and given a seat at White Harbor. As a result, they are known for Undying Loyalty to the Starks and are the only Andal-descended, Seven-worshiping House in the North. At the time of the series, the head of the House is Wyman Manderly, and he and his family are naturally allies of the Starks, and and lose several members at the hands of the Lannisters and their allies including Wendel Manderly who was murdered at the Red Wedding. Wyman's cousin Donella, widowed Lady of Hornwood, was forcibly married by Ramsay Snow and then left to starve to death. Wyman Manderly is ultimately forced to surrender to the Lannisters in exchange for his son Wylis being released for being a hostage. In A Dance With Dragons, it is revealed that Wyman's surrender is an act, and he's actually plotting with some other Northern lords to restore House Stark and take revenge on the Freys and Boltons.

"Still, it may have been a blessing. He would have grown up to be a Frey."