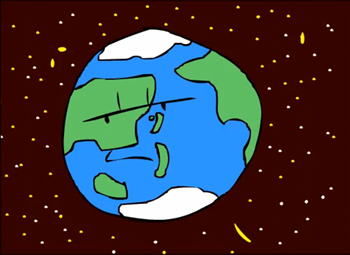 Standard issue final plot point to so many video games (particularly if it's an RPG) that it is more noticeable when it's absent.

You might spend the first several hours of the game Easing Into the Adventure, wandering around the First Town and doing things like delivering a chicken to a neighbouring village or saving Chekhov's Gunman from monsters. Ten hours in, however, your hometown will have become doomed, you'll be trying to Save the Princess, and the angst factor will have increased exponentially. Twenty hours in you'll Get on the Boat or discover the Global Airship, expanding your horizons and allowing you to chase down the Seven Crystals of Destiny. Thirty hours in you'll be reforging the Sword of Plot Advancement, and fifty hours in you'll be on the Amazing Technicolor Battlefield fighting the Big Bad's seventh form with the entire world as the prize.

Did we mention that part? Somewhere along the line, you'll learn that the fate of the entire world—not just your Doomed Hometown, not just The Kingdom, but the entire freakin' planet—is your party's final burden. And, of course, it must therefore be the Big Bad's ultimate goal—be it domination or annihilation. And it may not even be that mundane—there seems to be some sort of arms race among designers to raise the stakes as high as they can go, with the entire universe, or the space-time continuum, or reality as we know it, under attack.

It doesn't matter what the party's original goals were (or those of its members); they're going to end up Saving the World from an unstoppable, inconceivable threat - and since You Can't Thwart Stage One, they will only defeat said threat only when the world is right on the brink of doom. Due to this, the last hours of many such games tend to be pretty similar, ignoring windowdressing.

A corollary is that despite the all-encompassing nature of the threat, no one else in the world will assist you, or even care. Forget about receiving a " saving-the-world discount" from shops, or a few armies to help you storm The Very Definitely Final Dungeon.

Examples of Saving the World include: