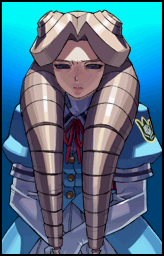 You think these Princess Curls are extreme, you should see the curling irons!

When the writers decide to play with a trope by turning the results Up to Eleven.

Since Tropes Are Flexible, they can be taken to various degrees. This is about taking them to degrees much higher than typical, often to ridiculous extremes.

In short, this is why The Same but More warns that higher degrees of tropes alone are not new tropes. Those are simply Playing with a Trope.

This is usually done for parody (which makes this a Sister Trope to Satire, Parody, Pastiche), but there can be other reasons to do this.

Examples of Exaggerated Trope include:

Retrieved from "https://allthetropes.org/w/index.php?title=Exaggerated_Trope&oldid=1515792"
Categories:
Cookies help us deliver our services. By using our services, you agree to our use of cookies.