Everything About Fiction You Never Wanted to Know.
Jump to navigation Jump to search
/wiki/The Brothers Grimm (creator)creator 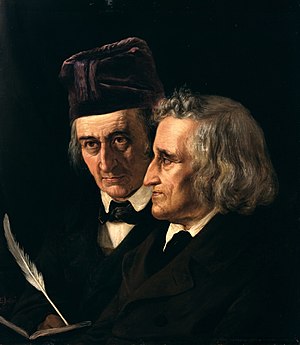 Jacob Ludwig Carl and Wilhelm Carl Grimm, known collectively as The Brothers Grimm, were German linguists born in the late 18th century, who, in an effort to preserve Germany's heritage and promote cultural unity in a period of political disunity, collected a vast array of folk tales from their fellow Germans (mostly middle-and upper-class friends). The brothers eventually published these stories in the famous collection which they called Kinder- und Hausmärchen (Children's and Household Tales), but which is generally better known among English-speakers as Grimms' Fairy Tales.

Although the original intent of the collection was to preserve the stories exactly as told, the Grimms gave in more and more in each new edition to the temptation to make various "improving" alterations. The scholarly Jacob sought to establish more Germanic forms of the stories by replacing foreign words such as „Prinz” and Prinzessin with Teutonic terms such „Königssohn” and Königstochter, replacing fays with enchantresses and wise women and by supplying missing plot-elements from historic sources; the more creative-minded Wilhelm tried to make the stories more acceptable to a popular audience (presumably including children), by selectively Bowdlerizing the tales published, notably removing evil mothers and replacing them with step-mothers (as in the case of "Snow White"), by removing implications of sex and pregnancy (as in "Rapunzel"), and by re-writing the stories in a more literary style. (Though they notably did not tone down the violence, even for the children.)

Standards of child-friendliness have shifted in the past 200 years; some of the Grimms' stories are now considered shockingly violent -- and at least one of them, "The Jew in the Thorns", notoriously religiously insensitive. (Similar stories appear in the Grimms' other, more adult, story collection, Deutsche Sagen (German Legends)). The...well, grim... nature of many of the original stories have made the Grimm Brothers the Trope Namer for Grimmification. It should be noted, however, that some of the tales included by the Grimms were not intended for children in the first place -- hence the distinction made in the name of their popular collection.

Although many of the Grimms' fairy tales now languish in obscurity, a significant chunk of these stories remain in the popular consciousness. Some of the better known include:

Although the Grimms' collection does contain a version of ""Cinderella" ("Aschenputtel"), the better known version is based on an earlier story by Charles Perrault. "Sleeping Beauty" was also written by Perrault, but the Grimms' version ("Dornröschen") is better known. And despite popular belief, "Beauty and The Beast" has nothing to do with them at all.

Although best known today for their fairy tales and mythological studies (such as the monumental Deutsche Mythologie (Germanic Mythology), they were also pioneers in linguistics (Jacob in particular is remembered for Grimm's Law of Consonantal Shift), wrote the first bit of the German dictionary, and were two out of the "Göttingen Seven," the prominent liberal professors at Gōttingen University whose dismissal by the autocratic English King of Hanover caused a major stir in 1830s Germany.

The Grimms were the subject of a highly fantasticated Musical Biopic in 1962, called The Wonderful World of the Brothers Grimm, with Karlheinz Böhm as Jacob and Laurence Harvey as Wilhelm; the film won 1 Oscar (Costume Design) and was nominated for 3 more. In 1998, the brothers, played by Andy Henderson and Joerg Stadler, made an appearance in Ever After: A Cinderella Story (despite the film being a riff more on the Perrault than on the Grimm version of ""Cinderella"). In 2005, Terry Gilliam made The Brothers Grimm, a decidedly unsettling reinterpretation; Heath Ledger and Matt Damon were the brethren in this outing. The Grimms in the form of Allen Smith and Millen Baird were deconstructed in the 2006 film Big Bad Wolves.

The Grimms, this time portrayed by Dean Jones and Paul Sand, were also the subject of a well-remembered 1977 TV movie, Once Upon A Brothers Grimm, which was nominated for 5 Emmys, winning 2.

Examples of tropes in the Grimms' folk tales:
Retrieved from "https://allthetropes.org/w/index.php?title=The_Brothers_Grimm_(creator)&oldid=1869922"
Categories:
Cookies help us deliver our services. By using our services, you agree to our use of cookies.