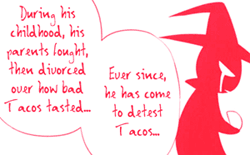 And so, he harnessed the power of corn to wage war...

The writers have a villain, and they want to give that character some depth. The obvious solution is to Pet the Dog. Unfortunately, that tends to make the character less scary, causing Badass Decay and Villain Decay.

Instead, writers may keep the villain just as vile as before, but reveal that they have an excuse for being that way. The most popular one is the Freudian Excuse: the villain had a crapsack childhood, making them insane and warping their perception on the universe, and that's why they go around as uncaring sociopaths insulting everyone or blowing buildings up. (Or, if in School, they had a crappy home and school life, for example being frequently bullied). Sometimes, this is done for deliberate Badass Decay, but usually it isn't. The villain is as horrible as ever, only now the audience can look at them in a new way.

Unfortunately, just like a Pet the Dog moment, the Freudian Excuse sometimes fails to give a villain any depth at all. If the villain is particularly evil, it can come across as illogical and lame: "his father beat him, and that's why he's a mass murderer." Even if the villain's crimes are proportionate, the writers have to strike a hard balance. Too much emphasis on the excuse, and it looks like they're attorneys justifying the villain. Too little, and it looks like a ridiculously gratuitous scene of Wangst.

Most importantly, the Freudian Excuse does not involve the character growing or changing; it explains why they haven't changed, and in fact, often serves as a signal that they could not and never will. Bad writers often think that the excuse can substitute for Character Development, but it does the exact opposite. Good writers know the excuse has limits, and watch them. If done shrewdly enough, it may lead the audience to Cry for the Devil. A Freudian Excuse is often invoked to explain how someone who Used to Be a Sweet Kid became such a monster instead - again, much writerly skill is generally needed to pull this off and make it poignant rather than pathetic.

The excuse however is often subverted. One way is to use it to show how pathetic a villain is—after the villain gives a Hannibal Lecture, a hero's classic rebuttal is "says the guy who became a hit man to work out his daddy issues." The second is for the villain to sneer at the hero's pity for them, even exploiting it in a fight. (In a Double Subversion, the villain is protesting far too much.) A third subversion is to simply present it as an explanation rather than a full excuse. Sometimes the author simply shows what warped the character into what they became without expecting the audience to feel any more sympathetic toward the character- a sort of psychological How We Got Here. And a fourth subversion is to use the Freudian Excuse as a justification for a Heel Face Turn; if the villain gets treatment he no longer has any reason to be evil and may pay the heroes back out of gratitude.

Many Crime and Punishment Series (and Darker and Edgier Superhero comics) are notorious for Writer on Board stories deconstructing the Freudian Excuse. At least once per storyline, there will be a slimy psychiatrist or defense attorney who declares that the Neck-Chopping Killer is merely a victim of circumstances, and it's the hero who should be locked away. These stories tend to end with said psychiatrist or defense attorney getting murdered by the killer, which is depicted as poetic Irony.

Fandoms often have a tendency to create these out of whole cloth for a Draco in Leather Pants.

Often Truth in Television, justifiable whether it's any model of psychology, Freudian, Psychodynamic, Cognitive or Behaviouristic: children who have been conditioned in violence, pain and misunderstanding often tend to perceive a world of violence, pain and misunderstanding and inflict it upon others. Sometimes, in more neurologically based cases, the "Freudian Excuse" can be caused by mere brain damage or halted neuron development which was the result of said abuse.

Takes the "It's Nurture" position of the "Nature vs. Nurture" argument. For the Nature position, see In the Blood.

See also Start of Darkness, Monster Sob Story, Abusive Parents, Parental Abandonment, Mommy Issues, "Well Done, Son" Guy, Single-Issue Psychology, Being Tortured Makes You Evil and Who's Laughing Now?. In cases of Complete Monsters, the Freudian Excuse fails to justify anything, merely explain and nothing more. Not to be confused with Freud Was Right or All Psychology Is Freudian.

Examples of Freudian Excuse are listed on these subpages:

Retrieved from "https://allthetropes.org/w/index.php?title=Freudian_Excuse&oldid=1921272"
Categories:
Cookies help us deliver our services. By using our services, you agree to our use of cookies.