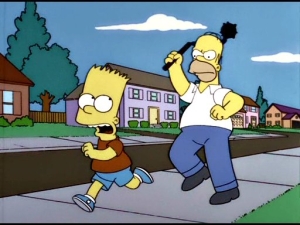 When Abusive Parents are Played for Laughs.

In the real world, abuse is a traumatic evil that can warp a child's psyche, causing them extensive physical and psychological problems as they develop into adults. Sometimes, abused children will go on to abuse children themselves. It's a horror that takes years of intensive therapy and anger management to recover from, if it ever is actually recovered from.

In the media, on the other hand, a fair amount of Black Comedy can come from a character's horrible childhood. Notably, such comedy seldom includes sexual abuse, which tends to take things into Dude, Not Funny territory. It's usually Parental Neglect or seriously bizarre methods of parenting exaggerated to the point of comedy.

This can be played for laughs and seriousness alternately, especially the characters are comically screwed up already and their parents are shown to be equally or (often) more messed up.

Examples of Hilariously Abusive Childhood include:

Retrieved from "https://allthetropes.org/w/index.php?title=Hilariously_Abusive_Childhood&oldid=1873542"
Categories:
Cookies help us deliver our services. By using our services, you agree to our use of cookies.