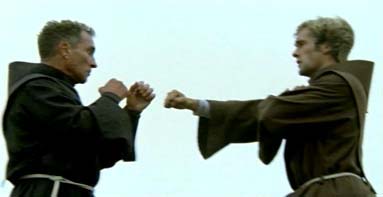 I kick arse for the Lord!
—The priest in Braindead

The main features of Buddhist monks from Shaolin are chanting, meditation and kick-ass martial arts prowess (which they originally learned from retired soldiers who became monks).

For some reason, fiction authors sometimes can't see the difference.

It's not uncommon (usually in fantasy settings) to see a Christian or quasi-Christian monk (often complete with robe, hood, tonsure, Christian name, etc.) whose main defining skills are one or all of the following:

It seems that you're supposed to be able to do Shaolin-style things just because you're... well, a "monk".

'Cause, hey, all monks are the same, amirite?

Make sure not to confuse this Trope with examples of Shaolin-based monks who know kung fu, which is perfectly justified, since these particular monks learned from former soldiers, and practiced combat in secret or disguised as religious rituals (since it was generally illegal). But, if these Shaolin-based monks are supposed to belong to a Crystal Dragon Jesus religion, then these examples may belong here. Examples where every Chinese monk knows kung fu also belongs here, seeing as how most Chinese monastic orders do not engage in any martial arts training.

This Trope is the sister (brother?) trope of Nuns Are Mikos. Compare to Everybody Was Kung-Fu Fighting, when everybody seems to know kung fu. (Most Chinese didn't). See also Enlightenment Superpowers for a result of all that meditating. Also compare to Not That Kind of Doctor ("all guys called 'doctor something' know medicine"), Open-Heart Dentistry ("all medical doctors know every medical discipline") and Omnidisciplinary Scientist ("all scientists know every science"). Thematically related to Church Militant, Religious Bruiser, Warrior Monk (duh) and Bare-Fisted Monk (duh). ...And sometimes the One knowing kung fu isn't just a mere monk, but our Lord and Saviour himself...

Examples of All Monks Know Kung Fu include:

Belkar: Hey, listen buddy, sure you can hire Friar Tuck over here--
Monk: Not that kind of monk, actually!