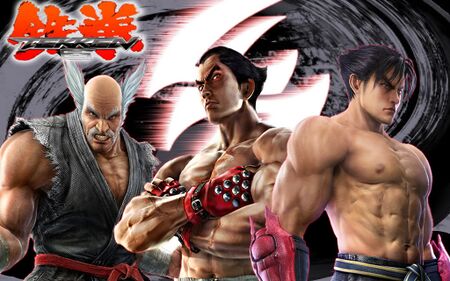 Family therapy did not take.

Tekken is one of Namco's most popular franchises, and possibly the most successful 3D Fighting Game series.

The game's plot starts with the Mishima Zaibatsu, a conglomerate of the Mishima family, run by Heihachi Mishima, sponsoring a tournament called King of Iron Fist. The winner is promised a huge prize... if they can beat Heihachi, that is. As it turns out, the tournament winner is in fact his disgruntled son Kazuya Mishima. Having been thrown into a ravine when he was only five years old by Heihachi himself, Kazuya made a Deal with the Devil, survived, and trained himself so he could exact revenge. Heihachi, too late to realize Kazuya's devilish power, was soundly beaten and was thrown by Kazuya into the same ravine where he was thrown by Heihachi.

Eventually, Heihachi comes back and reclaims his place, killing Kazuya by throwing him into a volcano. The third game takes place after a Time Skip and deals with Kazuya's son, Jin Kazama. The fourth deals with the return of Kazuya, and later games continue to cover the struggle inside the Mishima family, with the Devil Gene complicating matters.

Tekken has been extremely successful in arcades (and later in console ports), with characters' fighting styles influenced by real life martial arts. The series contains six games so far, as well as a dream tag match game called Tekken Tag Tournament, and a seventh game on the way. It has also spawned 3 separate movies; one traditionally animated, one live-action and the most recent a CG movie. Ports were exclusively to the PlayStation consoles until the 6th installment, which received an Xbox 360 port. The series has often been derided by the father of the Dead or Alive series, Tomonobu Itagaki; however, other fighting game developers (such as Mortal Kombat co-creator Ed Boon), enjoy the series.

Lately, the series has been going from strength to strength; Tekken Tag Tournament 2 was confirmed in late 2010 to much fanfare and approval, and looks to be one of the most expansive and exciting entries of the series so far. Nintendo fans are finally seeing some Tekken love for the first time since Tekken Advance also, with Tekken 3D: Prime Edition for the Nintendo 3DS and a title for the Wii U currently in development. Lastly, but certainly not least, the series is finally going head-to-head with its old rival, in the form of Street Fighter X Tekken and Tekken X Street Fighter, 2 separate Crossover games developed by Capcom and Namco respectively. An updated version of Tekken Tag Tournament 2, Tekken Tag Tournament 2 Unlimited is set to be released soon for consoles, featuring handicap matches, one on one battles and character re-balancing.

Furthermore, a 3D CG movie based on the series (and developed by Namco itself) premiered in July 2011, called Tekken: Blood Vengeance, a canonical movie expanding on the series lore of the Devil Gene. The movie saw a limited theatrical release, but will see most of its distribution via DVD and Blu-ray releases later in 2011, as well as being bundled with Tekken Hybrid (a Blu-ray which also includes Tekken Tag Tournament HD and a demo of Tekken Tag Tournament 2) and Tekken 3D: Prime Edition.

The series' many, many characters can all be found here.

Tropes used in Tekken include:
Retrieved from "https://allthetropes.org/w/index.php?title=Tekken&oldid=1730511"
Categories:
Cookies help us deliver our services. By using our services, you agree to our use of cookies.