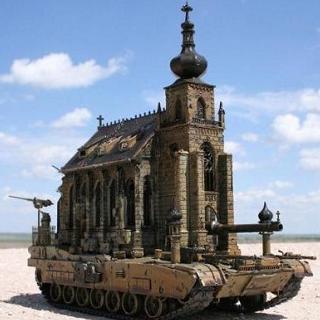 The world often notes that certain groups take God and Guns with equal fervor. The Church Militant takes this observation to the natural conclusion, a Catholic (or Catholic-like) superpower that is very heavily armed. While most agents will rely on Hand Cannons, expect a few priests and nuns to swing around a broadsword or two. Or three/six, which seems to be some kind of standard. In fantasy settings they'll probably also have divine magic - White Magic for Good-aligned religions and Black Magic for the Evil ones; remember, though, White isn't always good, just as Black isn't always bad.

Oftentimes, they might instead favor the mace, hammer, or staff out of an alleged commitment to peace. What in the world makes bashing a head in less "violent" than cutting it off? Well, sometimes it's because theoretically blunt instruments are pretty good for "just" beating the hell out of an opponent. Other times, it's because they take an excessively legalist view of a commandment against, say, "spilling blood" or "taking up the sword." Then again, sometimes it's just because bludgeoning weapons are cheap, and there are vows of poverty to consider.

Usually justified by the actual existence of witches, vampires or The Legions of Hell; nevertheless the Church Militant often struggles with going too far. Don't expect heavy consistency with real world religious teachings, writers will make it up as they go along (c.f. The Lowest Cosmic Denominator). Anime will just substitute in that Nuns Are Mikos.

Individual members are usually Hunters or Warrior Monks and can also be referred to as "church militants" (where "militant" is the noun). Note that this trope really only applies to Western theist/deist religions, as Eastern religions (Buddhism, Shinto, Tao, etc.) are almost always depicted as kung-fu-slinging warrior monks (sometimes Christian/Pseudo-Christian monks can be kung-fu-slinging as well). The sword-slinging holy-equipped special forces of the Church Military are usually known as Paladins. Nuns with guns usually come halfway between this and Amazon Brigade.

If a Church Militant exists as a subdivision of a larger, predominantly pacifist Church, expect it to be called "The Inquisition" regardless of the fact that Real Life inquisition was more like a detective and judicial branch of the Catholic Church (see also The Spanish Inquisition) than its military arm. See also Kung Fu Jesus.

Not to be confused with Corrupt Church, where the religious folks are clearly the bad guys. Badass clergymen who are minorities amongst a meeker lot would be Badass Preachers instead. Also not to be confused with the actual Catholic concept of the Church Militant which comprises all believers still on Earth, as compared with the Church Triumphant, the believers in Heaven. Here, the "militant" refers not to actual violence but the spiritual combat that believers undergo to thwart the Devil and his temptations so as to become a member of the Church Triumphant.

The moral questions surrounding the idea of religious authorities advocating violence have been around since the beginning of monotheism. Polytheistic religions generally don't result in Moral Dissonance, instead delegating war behavior to deities who are specifically devoted to kicking ass. Monotheistic religions, on the other hand, have always had the problem of reconciling a loving God (assuming He is loving to begin with) with the specifically unloving human behavior that is intrinsic to warfare. It must also be understood that soldiers face death every day, and naturally have a vested interest in spiritual pursuits. Also, in general, non-Christian religions portrayed as Church Militants are usually frowned upon.

Church Militants often make use of Smite Evil. The smitees may not appreciate this, and may strike back, e.g. through Religion Rant Songs or other means.

Has some overlap with Naughty Nuns, often in the form of 'Nunsploitation' films. One of the groups you may ask Who You Gonna Call? when the Forces of Darkness strike. See also Religious Bruiser.

Not to be confused with the Roman Catholic Church's meaning of "Church Militant".

Examples of Church Militant include:

Retrieved from "https://allthetropes.org/w/index.php?title=Church_Militant&oldid=1785970"
Categories:
Cookies help us deliver our services. By using our services, you agree to our use of cookies.