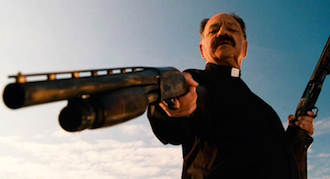 A preacher who is The Hunter, or just a good fighter, who belongs to a church that isn't the Church Militant. He has the ability to literally kick arse for the Lord.

May be a Technical Pacifist, and usually a Guile Hero. May be an Actual Pacifist; if so, like other Actual Pacifists, about the only thing that will goad him into violence is someone else being directly threatened with death. Even then he may simply take every blow without flinching and dare you to hit harder. Often looks like Crouching Moron, Hidden Badass.

Sometimes he's the Christian equivalent of Papa Wolf. He'll kick in the door and blow away anyone who dares harm his flock/congregation/head of church.

Or may just be someone who believes that fighting is okay under certain circumstances—when those above him in the church hierarchy don't.

This Trope applies to Catholics, Anglicans, many priests of Crystal Dragon Jesus, and Quakers. You rarely see Quakers in film without this trope getting invoked — though with that religion, the definition of "preacher" gets stretched. (So does the definition of "Quaker" — they're one of the few universally pacifist denominations.) Wolfwood also counts.

This trope does not apply to preachers in certain fundamentalist churches and rarely applies to priests of medieval Catholic churches. Those are covered under Church Militant and Warrior Monk—that is, the whole church is, or tries to be, Badass. A Badass Preacher is a minority in his church hierarchy.

If a Badass person does not belong to a church hierarchy but still turns out to be religious, he's the Religious Bruiser.

In terms of rank, the Authority Tropes arguably equal are Corrupt Corporate Executive, Irish Priest, Landlord, Preacher Man, Pedophile Priest, Good Shepherd, Schoolteachers, Sexy Priest, Sinister Minister and The Vicar. Related to Turbulent Priest who is usually a step up in terms of authority, and fights with his words. For the next step down, see Student Council President. For the next step up, see Dean Bitterman.

Examples of Badass Preacher include:

Retrieved from "https://allthetropes.org/w/index.php?title=Badass_Preacher&oldid=1964582"
Categories:
Cookies help us deliver our services. By using our services, you agree to our use of cookies.