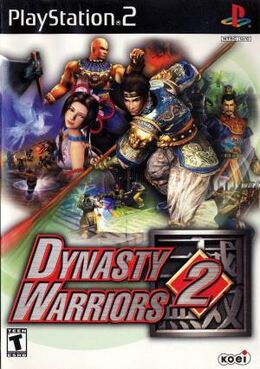 Dynasty Warriors is a series of games (known in Japan as the Shin San Goku[1] Musou series) produced by Koei. They're based on the novel "San Goku Shi" ("Romance of the Three Kingdoms"), which covers one of the most turbulent eras of ancient Chinese history (and the basis for Koei's popular series of hard strategy games of the same name).

The games epitomize the Hack and Slash genre, although many of the games have special levels and "modes" of gameplay, which allow single and multi-player duels between characters, as well as special "Challenge Modes", which allow the player to select a character and have them perform feats of strength and skill (although most of these are just an excuse to mash buttons).

The games feature a colorful cast of characters, most of whom are part of the storyline's three main warring factions, the Kingdoms of Wei, Wu, and Shu. There are also a few other characters thrown in, including the unsavory usurper Dong Zhuo and his Evil Minion Lu Bu, the greatest Badass in all of Ancient China. The games also feature lots of hammy voice acting, which is either very funny or very annoying... or sometimes both. This may make you want to plug your ears, but then you wouldn't be able to hear the game's cool Chinese-Techno-Rock Guitar soundtrack.

Warriors Orochi is a spin-off crossover of Dynasty Warriors with Samurai Warriors, while Dynasty Warriors: Gundam combines the formula with... well, Gundams. Bladestorm: The Hundred Years War transposes the action to the Hundred Years' War, and gives the player a whole squad to do the incredible feats with, instead of one man, but is otherwise the same. There's also a game based on Fist of the North Star called Fist Of The North Star: Ken's Rage (and a sequel in the works). There's also Warriors: Legends of Troy, based on the Trojan War. There is also a One Piece game coming called One Piece: Pirate Warriors. There is also an online spinoff that can be downloaded free of charge.

Given the games Loads and Loads of Characters, here is a character sheet to learn more about them.

The following tropes are common to many or all entries in the Dynasty Warriors franchise.
For tropes specific to individual installments, visit their respective work pages.
Retrieved from "https://allthetropes.org/w/index.php?title=Dynasty_Warriors&oldid=1929026"
Categories:
Cookies help us deliver our services. By using our services, you agree to our use of cookies.