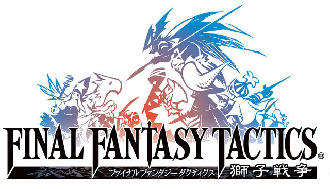 A Gaiden Game entry into the pants-crappingly popular Final Fantasy series. It combined Turn-Based Strategy with a Role-Playing Game, and is the first game in the series to take place in the world of Ivalice (followed by Final Fantasy Tactics Advance, Final Fantasy Tactics A2 and Final Fantasy XII, as well as the non-Final Fantasy game Vagrant Story). Due to the immense resemblance and many developers shared between the two series, particularly Yasumi Matsuno, the game is often seen as a Spiritual Successor to Tactics Ogre.

This game focuses on the exploits of Ramza Beoulve, the second-youngest member of the noble Beoulve family, as he transitions from military-school cadet to mercenary to hero. Behind him is an intricately complex story with twists, turns, and political intrigue (based on the real-life Wars of the Roses): at the center of this maelstrom is Ramza's best friend, Delita Heiral, a commoner who makes a Rags to Riches transformation and eventually becomes king. Of course, in a world where politics, Corrupt Churches and Chronic Backstabbing Disorder are the rule, all is not as it seems...

While not the traditional Final Fantasy fare, it was embraced by Turn-Based Strategy fans for its challenging, satisfying gameplay and the sheer depth of its Job System, which took the similar mechanic in Final Fantasy III and cranked it Up to Eleven. It was also renowned for its Blind Idiot Translation and resulting Engrish, often called "Daravonese" after the tutorial character who spouted most of it. The PSP remake, mercifully, was far better in this regard, having been localized by longtime Square-Enix collaborator Joseph Reeder.

It has also been re-released four times. The first was on the PS 1's "Greatest Hits" line, though it remained hard to find. The other three were on the PlayStation Portable: first as the Video Game Remake Final Fantasy Tactics: The War of the Lions, the second via the PlayStation Store in a straight port (which oddly enough, does not encounter slowdowns in places The War of the Lions does), and the last on iOS and Android, based on the PSP version, but without the slowdown.

Tropes used in Final Fantasy Tactics include:
Retrieved from "https://allthetropes.org/w/index.php?title=Final_Fantasy_Tactics&oldid=1897102"
Categories:
Cookies help us deliver our services. By using our services, you agree to our use of cookies.