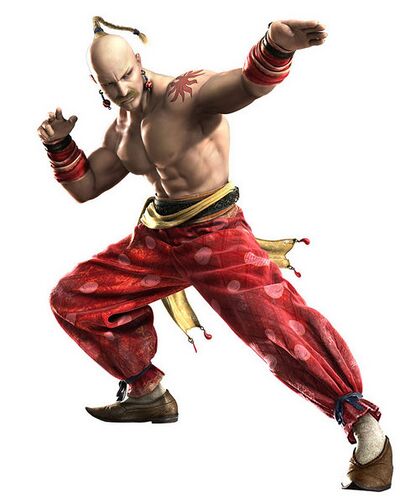 Don't let the polka-dots fool you. He's more than capable of beating you from here to Tibet and back.

The Bare-Fisted Monk excels in melee attacks without wielding weapons.

Bare-Fisted Monks have an unfortunate tendency to fall behind in the endgame, when everyone else is wielding mighty artifacts of yore and they're still throwing punches.

Occasionally, they will have weapons they equip, but they either don't do much, or actually lower their attack, which if these weapons can only be used by them, makes one wonder why they exist in the first place. Armor restrictions are also typical.

Compare with the Power Fist, which is a piece of equipment that augments unarmed attacks. Not to be confused with Good Old Fisticuffs, which is when the lack of a fighting style and weapons defeats people who have both.

Subtrope of Weapon of Choice, and pretty much exclusively the province of Warrior Monks (sometimes, even those from Western religions). Not applicable when everyone fights unarmed, of course—there's nothing surprising about Rocky fighting with bare fists, since... well.. that's the point. Ironically, the order of Monks that popular culture usually equates with bare-fisted fighting (those of the Shaolin Temple) also learns to master multiple weapons for holistic development.

Examples of Bare-Fisted Monk include:

Retrieved from "https://allthetropes.org/w/index.php?title=Bare-Fisted_Monk&oldid=1835119"
Categories:
Cookies help us deliver our services. By using our services, you agree to our use of cookies.