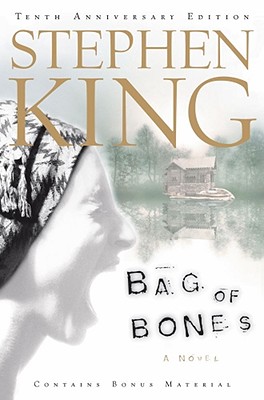 Sara Laughs. Just not on this cover image.

"...any good marriage is secret territory, a necessary white space on society's map. What others don't know about it is what makes it yours."

A 1998 novel by Stephen King. Michael Noonan is a popular novelist who is living an idyllic existence with his loving wife Johanna, until she unexpectedly dies one hot summer day. Losing Johanna leads directly to him losing his ability to write--grief has so crippled him that the mere act of writing causes severe panic attacks.

Haunted by memories of good times and by terrifying dreams taking place at their long-neglected summer home, Mike decides to finally attack the problem and see if returning there might help him get his life back on track. He returns to the summer home, named Sara Laughs after long-ago blues musician Sara Tidwell, to find it haunted with several different ghosts, which seem to have different agendas.

He makes immediate acquaintance with little Kyra Devore and her young mother, Mattie. They are the target of Mattie's extremely wealthy, extremely old, and extremely wicked father-in-law, who is determined to take Kyra away from Mattie. Michael's chance encounter with them draws him into the struggle. Charmed by the child, deeply attracted to her mother, and sitting on a few million dollars of his own, he decides to help Mattie fight back.

What Michael doesn't realize is that what appears to be a simple custody battle is really the final act of a vindictive ghost haunting the town, bent on avenging itself on the descendants of the men who murdered her a hundred years ago... and the seemingly nice country folks of this town are more than ready to let her finish.

Tropes used in Bag of Bones include:
Retrieved from "https://allthetropes.org/w/index.php?title=Bag_of_Bones&oldid=1678272"
Categories: