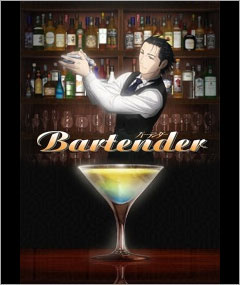 Bartender is the title of a Japanese manga series written by mangaka Araki Joh and illustrated by Kenji Nagatomo. Its focus is a genius bartender who uses his talents to ease the worries and soothe the souls of troubled customers. There are also anime (2006) and live action (2011) adaptations.

Bartender follows the nightlife of Ryu Sasakura, a bartending prodigy who is said to mix the best cocktails anyone has ever tasted. Sasakura bides his time in his bar, Lapin (or Eden Hall in the anime), hidden in a nook of the Ginza district in downtown Tokyo. Over the course of the series, various figures of high and low stature, all of who share unusual troubles and heavy burdens, are "invited" in and are treated to Sasakura's fine drinks, which, with guidance from the young bartender, lead the customers to reflect on their lives and decide on a course of action to tackle with their problems.

Tropes used in Bartender include:
Retrieved from "https://allthetropes.org/w/index.php?title=Bartender&oldid=1079484"
Categories: