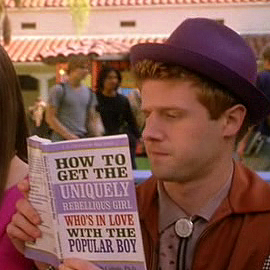 Ricky reading up on how to get that elusive Relationship Upgrade. It Got Worse.

Teasing at a romantic relationship between two platonic friends. The central driving force of many whole series, or an undercurrent to a main plot. The force with which the two deny any feelings is always inversely proportional to the truth. Just Friends is in essence, a relationship, a potential relationship or teased relationship between people who are simply Just Friends, in a normal, and regular manner. When a character uses the line "We're Just Friends" but no-one seems to believe them, this is likely to be the trope involved.

A tease used commonly in SitComs, dramas with single characters as principals. Friends drove this one into the ground repeatedly. Quite popular in teen-centric series that involve a main cast of friends of both sexes split 1:2 or 2:3. A show with this ratio given enough seasons will often produce a Just Friends relationship unless the two best friends of the lead share Belligerent Sexual Tension. It can go either way then.

The Relationship Upgrade is used as a major plot point for a season Cliff Hanger or series finale. An easy way to generate tension.

This can take several forms:

It is also the title of a 2005 comedy film based pretty much entirely on the trope. It is now located at Just Friends.

This is a Love Tropes and entries may spoil the endings of relationships and works as a whole. You have been warned.

Examples of Just Friends include:

Retrieved from "https://allthetropes.org/w/index.php?title=Just_Friends&oldid=1599215"
Categories:
Cookies help us deliver our services. By using our services, you agree to our use of cookies.