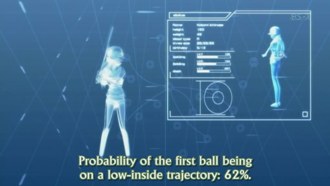 Some people learn by flipping pages. Some people must gain knowledge through pain. Some people study by television. And then there are those who just have to observe...

Most skills take a certain measure of practice to master... unless you are Good with Numbers. Those lucky few can substitute careful examination in place of careful practice, with the same results: success.

Need to make a million-to-one shot to stop the Doomsday Device from exploding the world, but have never even fired a gun? Just run off some mental calculations about your gun's firing speed, friction, gravity and the slightly off-kilter scope (how exactly the analyzer knows all those variables is pretty much always handwaved or never explained), and it's a done deal. Or defeat a jujitsu master by logically anticipating where his next strike will come from and remaining one step ahead. Mental capacity is limitless when the plot is at stake!

If he has time to explain himself, it always sounds something like "If My Calculations Are Correct". Of course, explaining it gives it a chance to fail. Relatedly, two awesomeness analysts don't really need to explain anything to each other, they can do it by Talking Through Technique.

The most common cause of Badass Bookworm syndrome, and often results from The Professor having a doctorate in general knowledge rather than any one field, while The Clock King can do this thanks to precise attention to detail and patterns. Characters who get to skip the analysis altogether due to some form of copycat power are Power Copying. Exactly What I Aimed At usually comes from this trope. They are most likely screwed if the opponent knows Confusion Fu. The Profiler does this with people. An author may use Super-Detailed Fight Narration to demonstrate that a character possesses this ability.

Examples of Awesomeness By Analysis include:

Retrieved from "https://allthetropes.org/w/index.php?title=Awesomeness_By_Analysis&oldid=1736849"
Categories:
Cookies help us deliver our services. By using our services, you agree to our use of cookies.