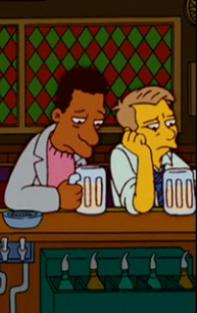 When one "Freaking Drink" isn't enough.

When characters get frustrated, they need a freaking drink. But when they are depressed, they get drunk. Then they might start acting very strangely indeed.

A well-known Truth in Television. It is often played for sympathetic laughs, but it can also be dramatic, pathetic, embarrassing or angsty, especially if it goes with Off the Wagon. Characters who do this may also suffer from Bad Dreams and are prone to not eating enough, and it might lead to spending the night with somebody as the next step in "healing."

Men who undergo this for a period often grow a Beard of Sorrow during the time.

If a friend shows up, the Power of Friendship can convert this to To Absent Friends. Sometimes. If not? A nail gun and a wagon can work wonders.

The Bottle Fairy does this from time to time. The Wide-Eyed Idealist tries this by getting Drunk on Milk. See Drunken Montage, an older trope that pictures the character stumbling through the big city night. See also: The Alcoholic. A nicotine addict reaches for the Cigarette of Anxiety.

If the depressed character recovers, it will probably lead to a He's Back moment.

Examples of Drowning My Sorrows include:

That's Tom Waits, "Bad Liver and a Broken Heart." Waits' voice is almost uniquely suited to this kind of song. He has quite a few other songs like this, including "The Piano Has Been Drinking", "I Hope That I Don't Fall in Love With You", "Invitation to the Blues", and "Saving All My Love for You".