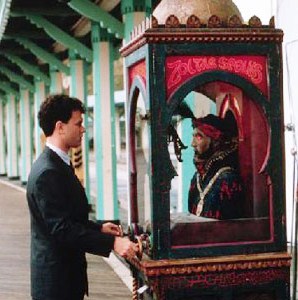 Big is a 1988 film produced by James L. Brooks and directed by Penny Marshall, which stars Tom Hanks as a 13-year-old boy in the body of a 30-something man. How did this happen? Well, Josh Baskin (David Moscow) was your average 13-year-old boy, who liked to play baseball and trade baseball cards. One evening, while he was at a carnival with his family, he tried to impress an older girl who was standing in line at a rollercoaster. But it backfired when the carnival worker pointed out he was too short to go on the ride. Despondent, he comes across the eerie-looking "Zoltar Speaks" wishing machine. With the machine, Josh wishes he was "big". The next morning, Josh awakens to find he's become a grown adult (Tom Hanks). He tries to go back to the carnival site but finds everything, including the wishing machine, gone. He tries to go home, but his mother mistakes him for an intruder and he gets driven out.

Desperate, he turns to his best friend, Billy Kopecki (Jared Rushton), for help. With a little money, he goes to New York City where he gets an entry-level job at the MacMillan Toy Company so he can support himself until he tracks down the Zoltar machine. While there, his childlike viewpoint and honesty helps him gain favor with the CEO, Mr. MacMillan (Robert Loggia), and he moves up the ranks of the company quickly. Which is how he meets Susan Lawrence (Elizabeth Perkins), an ambitious fellow executive. They soon fall for each other, although Josh starts to wonder: Should he stay with Susan or go back to his life as a 13-year-old?

This movie was a huge hit, critically and financially, in 1988. It even got Tom Hanks his first Academy Award nomination.

Tropes used in Big include:
Retrieved from "https://allthetropes.org/w/index.php?title=Big&oldid=1549965"
Categories: