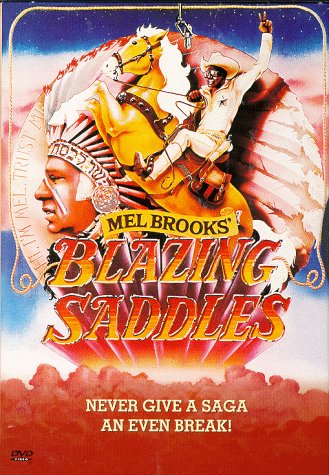 Blazing Saddles is another comedy masterpiece from Mel Brooks (with writing help from none other than Richard Pryor) which mercilessly spoofs The Western.

Railroad construction runs into quicksand, and the path needs re-routing -- but the tiny town of Rock Ridge stands in the way of progress. State Attorney General Hedy Hedley Lamarr schemes to get his hands on the now-priceless real estate by hiring thugs to kill the sheriff and terrify the locals into leaving. When they don't leave, Lamarr appoints a black man named Bart -- awaiting a death sentence for striking a white man -- as the new sheriff, a move calculated to result in Bart being killed by the racist townspeople and said townspeople leaving in disgust (which would give Lamarr free reign over the land). Once Bart arrives in Rock Ridge, Hilarity Ensues.

Blazing Saddles is completely, offensively, and unapologetically politically incorrect -- and it also skewers damn near every western trope listed on this site (and likely a few we haven't thought of yet).

Blazing Saddles was added to the National Film Registry in 2006.