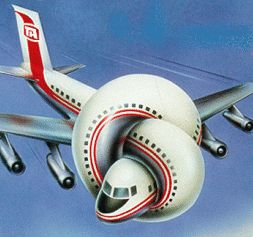 Airplane! is a 1980 comedic remake of an old disaster film, Zero Hour!, where Ted Striker ("Stryker" in Zero Hour), an ex-military pilot, has to get over his personal traumas to pilot a commercial plane after the crew is stricken by food poisoning, and reconcile with his estranged girlfriend at the same time. Take that basic plot, and have a silly joke every three seconds (or less). In fact, that is partly what makes the film work: if a joke falls flat, move on to the next one. Of course, further analysis of the jokes will just hurt the humor of it all. Just see the film for yourself.

It was followed by a sequel called Airplane II: The Sequel.

Tropes used in Airplane! include:
Retrieved from "https://allthetropes.org/w/index.php?title=Airplane!&oldid=1912931"
Categories:
Cookies help us deliver our services. By using our services, you agree to our use of cookies.