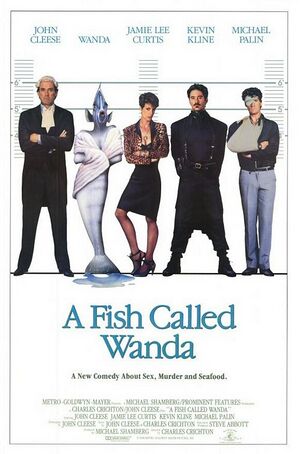 Fish on poster may be deceptively sexy. You have been warned.

A Fish Called Wanda is a 1988 British comedy film starring Kevin Kline, Jamie Lee Curtis, John Cleese and Michael Palin. The film is the final--and best known--film of legendary British comedy director Charles Crichton and its screenplay was written by Cleese and Crichton.

The film features a gang of criminals who double-cross each other and involves the comedic use of a steamroller.

Nominated for the Oscar for Best Original Screenplay, the film is literally lethally funny (see below). Kline, who plays the eccentric thief Otto in the film, won the Academy Award for Best Actor in a Supporting Role, a rare accomplishment for a comedic performance.

There are actually two characters called Wanda in the film. One is a fish. The other is Jamie Lee Curtis.

Later followed by a not-sequel with the same cast, Fierce Creatures.

Tropes used in A Fish Called Wanda include:
Retrieved from "https://allthetropes.org/w/index.php?title=A_Fish_Called_Wanda&oldid=1624659"
Categories: