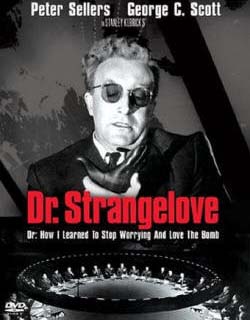 Dr. Strangelove or: How I Learned To Stop Worrying And Love The Bomb is a 1964 Black Comedy film by Stanley Kubrick. The plot is largely lifted from the 1958 novel Red Alert by Peter George.

One day, General Jack D. Ripper (Sterling Hayden) goes mental. He orders the nuclear bombers under his command to carry out a surprise attack on the Soviet Union. He puts his entire military base in lock-down with all communications cut, ordering all radios confiscated (so that Communist infiltrators can't receive outside commands) and all troops to fire on anyone who tries to enter the base, even if they appear to be fellow Americans (because they will surely be Communists in disguise). Ripper's aide, British Group Captain Lionel Mandrake (Peter Sellers), discovers one last unconfiscated radio - playing dance music. Realizing that civilian stations wouldn't be playing dance music while the country was under attack, Mandrake confronts General Ripper. Ripper explains that after he felt "a profound feeling of emptiness" following "the physical act of love" one night, he realized that the Communists were trying to contaminate America's "precious bodily fluids" by means of fluoridation and that a preemptive strike on the Soviet Union was necessary to force America to end the Communist threat once and for all.

In Washington, U.S. President Merkin Muffley (Peter Sellers again) holds a meeting in the War Room. The President's wheelchair-bound, ex-Nazi science adviser, Dr. Strangelove (also Peter Sellers), and the Soviet ambassador both confirm that an attack on the USSR will trigger The Doomsday Machine: a computer programmed to detonate a cobalt bomb that will kill nearly all life on Earth's surface with its radiation over the course of months, if the Soviet Union is attacked or if any attempt is made to disable the Doomsday Machine). The president gets on the hotline and desperately attempts to convince the drunken Soviet premier that the American attack is just a silly mistake as they attempt to call off the attack.

The film was supposed to be released in November 1963 (see Too Soon on the Trivia subpage), but was eventually released in January 1964.

Dr. Strangelove is the Trope Namer for:
Tropes used in Dr. Strangelove include:
Retrieved from "https://allthetropes.org/w/index.php?title=Dr._Strangelove&oldid=1791803"
Categories:
Cookies help us deliver our services. By using our services, you agree to our use of cookies.