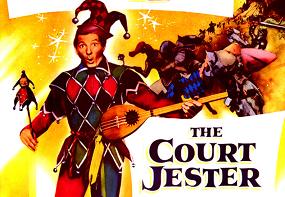 The royal family of old England has been wiped out. Roderick recently usurped the throne as king and now only an infant boy survives from the true line. The Black Fox, and his band of outlaws, have sworn to protect the true king.

But fate conspires to put the child in greater danger than ever before. When two of the outlaws, Hubert Hawkins and Maid Jean, try to take the child to safety, they wind up within the walls of the usurper's castle. Now they must rely on their wits to keep the child from being found.

If this were a drama, the odds would be against them. But this is Played for Laughs.

This 1955 Paramount film, written and directed by Norman Panama and Melvin Frank, and starring Danny Kaye, Glynis Johns, Basil Rahtbone, Angela Lansbury, Cecil Parker, Mildred Natwick, and John Carradine, has been a Comedy Cult Classic on TV for years, mercilessly mocking the conventions of medieval Swashbuckler films of the 1930s through the 1950s. A lot of it is thanks to the talent of Danny Kaye, who is about as unlikely an adventure hero as you could get, and the film makes sure to milk every drop of that.

It flopped when it came out, but was later a hit on TV. Now it's on the American Film Institute's list of "100 Years... 100 Laughs," and preserved in the United States National Film Registry by the Library of Congress for being "culturally, historically, or aesthetically significant".

Tropes used in The Court Jester include:
Retrieved from "https://allthetropes.org/w/index.php?title=The_Court_Jester&oldid=1833342"
Categories:
Cookies help us deliver our services. By using our services, you agree to our use of cookies.