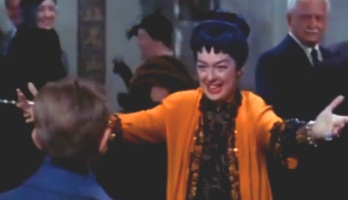 Auntie Mame and its sequel Around the World with Auntie Mame were novels written in the 1950s (Auntie Mame came out in 1955, and Around the World in 1958) about the adventures of a young boy being raised as the ward of his eccentric, impulsive, wealthy aunt. The author, Evan Tanner, wrote under the pseudonym of "Patrick Dennis", and used that name for his narrator.

The first novel was adapted into a 1956 play by Jerome Lawrence and Robert Lee, which appeared on Broadway with Rosalind Russell starring in the title role. This was itself adapted into a 1958 film (also starring Russell). In 1966 Jerry Herman turned the story into The Musical Mame (starring Angela Lansbury), and this version in turn was made into a 1974 film (starring Lucille Ball).

Tropes used in Auntie Mame include:

The various adaptations provide examples of:

Retrieved from "https://allthetropes.org/w/index.php?title=Auntie_Mame&oldid=1833543"
Categories:
Cookies help us deliver our services. By using our services, you agree to our use of cookies.