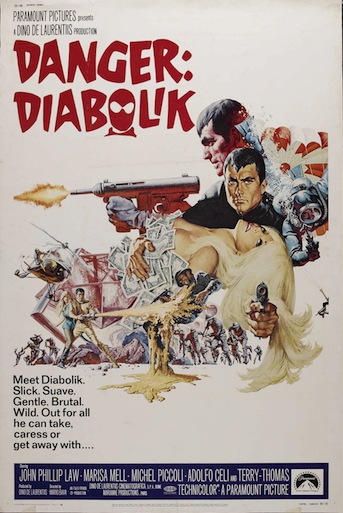 Not so-gentlemanly thief Diabolik (John Phillip Law, of Barbarella and Space Mutiny fame) terrorizes the European countryside, killing, maiming and stealing to satisfy the mercurial whims of his girlfriend Eva, all whilst dodging semi-competent Police Inspector Ginko. For Eva's birthday, Diabolik determines to steal an exquisite emerald necklace from some rich old toddy. Unfortunately for him, it's a cunning trap set up by Inspector Ginko. Doubly unfortunate, the European criminal element has united under mob boss Valmont in order to capture Diabolik. Will Diabolik escape the two-pronged trap, or will Ginko finally get his man? Will Valmont play the hero? Will Eva survive her experience in the Infrared Room? And what of Diabolik's plans to swim through the center of the sun?

This movie, based upon an Italian comic book character, served as the inspiration behind the Beastie Boys' music video for "Body Movin".

It was featured as the series finale of Mystery Science Theater 3000. See here for that episode.

Tropes used in Danger: Diabolik include:

Valmont: [Watching a speedboat approaching] Is that Stud, coming?