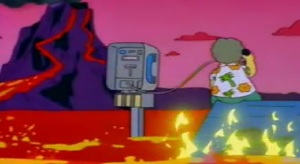 As awesome as lava is, most TV writers and video game developers forget that "really hot" part. The hero is making his way through the Lethal Lava Land, but wait! There are floating rocks, he can make it across in a really dramatic way! Except in the real world, the rising heat would have fried him already, and rocks do not float in lava anyway. Put your hand above an open flame and you have an idea of how hot that room, cave, or Eternal Engine should be. While it's possible for the outer layer of lava to cool, forming an insulating shell where the inner layer flows but people can get close to it relatively safely as long as they don't touch it, this is never seen in fiction where red-hot lava flows as free and exposed as river water.

Convection, the process by which a liquid or gas (like air) forms currents that very quickly spread heat from a hot thing to its environment, does not exist in TV land. Convection, Schmonvection - as long as you don't touch the lava, you're okay. Note that this trope covers heat radiation as well (but Radiation Schmadiation would sound like I Love Nuclear Power...), and seeing as large explosions create shockwaves as well as fireballs, this also covers Overpressure What Overpressure. TV also ignores the other hazards of volcanoes and lava flows, such as toxic gases and blinding, choking ash.

Although lava is the primary offender, this also applies to any time convection is ignored for the sake of Rule of Cool, such as when a character is standing above or near a large fire or any other extreme heat source. If you don't touch the raging inferno, boiling lake, or white-hot walls, you'll be fine.

For some reason, the reverse is demonstrated a bit more realistically; characters will feel cold in a cave or other area that's in perpetual winter, or frigid enough to have ice form on the walls. However, as long as they bundle up, the most they'll ever get is a longing for some hot cocoa and a warm fireplace. In addition to the obvious Rule of Cool involved, another justification may lie with the Rule of Perception: Viewers can't feel any heat, so obviously there isn't any. This is especially applicable to Video Games, where having to dodge not only lava, but the invisible heat it gives off would be rather irritating.

Lava is also rarely found just calmly laying around - when it slows, it has time to cool and harden. If it's been liquid for any appreciable length of time, it will probably look like this. This is a subtrope of Artistic License Physics.

A complete but no more accurate inversion is "Space Is Cold", where there is no convection, but TV acts as though there is.

Examples of Convection, Schmonvection include:

Countless video games have Lethal Lava Land levels that you don't lose health for just being in. For example:

Retrieved from "https://allthetropes.org/w/index.php?title=Convection,_Schmonvection&oldid=1894822"
Categories:
Cookies help us deliver our services. By using our services, you agree to our use of cookies.