Everything About Fiction You Never Wanted to Know.
(Redirected from Disney Afternoon)
Jump to navigation Jump to search 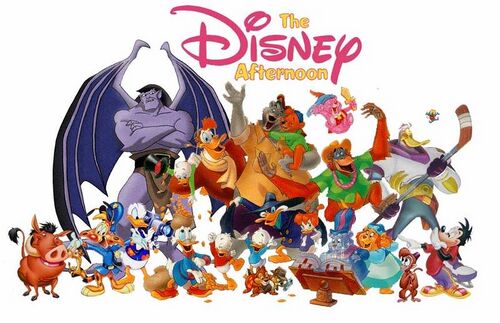 A made-for-syndication programming block featuring many of Disney's original television shows that ran from 1990 until 1999.

The block was two hours long, consisting of four half-hour shows. The lineup changed after every season, adding a new show to the end of the line up while the first show would be bumped off. Eventually, the block was shortened to ninety minutes in 1997. While the block was a hit, it eventually became unpractical when Disney began producing more shows than could be featured in a two-hour block. It ended in 1999, after a successful ten year run.

During its run it spawned an attraction at Disneyland, a soundtrack (still available on iTunes), and a comic book published by Marvel. It also had a major comic event in Disney Adventures magazine called The Legend of the Chaos God. Currently a couple of shows have been revived in comics: Gargoyles had an all-too-short (and yet too long) comic by Slave Labor Graphics, while Boom! Studios has begun featuring DuckTales (1987) elements in the long-running Uncle Scrooge comics, then launched new series for Darkwing Duck, Chip 'n Dale Rescue Rangers and DuckTales (1987).

Shows featured on the block, in the order they were featured:

Tropes used in The Disney Afternoon include:
Retrieved from "https://allthetropes.org/w/index.php?title=The_Disney_Afternoon&oldid=1928127"
Categories:
Cookies help us deliver our services. By using our services, you agree to our use of cookies.