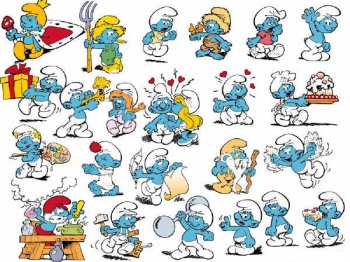 Take note of the Male-to-Female ratio.

For any series not aimed solely at females, odds are high that only one female will be in the regular cast.

The Smurfette Principle is the tendency for works of fiction to have exactly one female amongst an ensemble of male characters, in spite of the fact that roughly half of the human race is female. Unless a show is purposefully aimed at a female viewing audience, the main characters will tend to be disproportionately male.

In many series, men will have various different personalities, but women will always be The Chick. Thus, by the Law of Conservation of Detail, you only need one.

In other cases, the women are feminized versions of existing male characters.

This trope has lessened over time, but even now it often applies to animated fare aimed at boys or a general audience. This is especially serious when the regular cast is full of synthetic entities or other species which have a voice or are sufficiently humanoid; these will always be more masculine than feminine, with any feminine examples receiving special attention, suggesting that women are merely an unusual subtype of men.

Why does this trope happen? Often, the problem lies with the source material—the work's an adaptation of something written or created decades before equal recognition for women started to gain momentum. Sometimes, however, writers will try to correct this problem by inserting a few more female characters or at least an Affirmative Action Girl.

When the time for merchandising comes, unless the cast is all female, manufacturers won't create as many figures of the female members as they would males of the franchise even if the series is Merchandise-Driven (or at least, until the mid-90's). This creates a vicious cycle in which The Smurfette Principle is upheld by both toy manufacturers and TV writers, each reasoning that the other will enforce it anyway. This may be because, statistically, companies believe that action figures of female characters don't sell as well as the male ones, all evidence to the contrary. Of course, the shortage of female action figures to base those figures on can lead to another vicious cycle.

In classic comedy animation or shows, especially slapstick, women are often absent because hitting a girl just isn't considered funny. (In the case of harmless Amusing Injuries, this isn't always the case.)

This trope can also be Justified Trope by its unfortunate accuracy in certain contexts. It is fairly realistic for armies, police forces, adventuring parties, and similar groups to be predominantly male, especially if set in a non-Politically-Correct History.

As noted in the examples below, this trope is nearly universal in all forms of media. Most writers try to balance this out with Positive Discrimination, making the girl more intelligent and level-headed than everyone else, but it still doesn't change the simple fact that there's only one of her. Usually, all it does is turn her into a Mary Sue for everyone to loathe.

Writers who recognize the problem after a season or two may expand the cast with Affirmative Action Girls. This is usually more effective.

Interestingly, this can extend to Mooks and the Monster of the Week with Mono-Gender Monsters, to avoid the Unfortunate Implications of violence against women.

The name of this trope was first coined by an article in the New York Times printed April 7, 1991, called "The Smurfette Principle". The article discussed the negative message which this trope gave its young audience: that males are individuals who have adventures, while females are a type of deviation who exist only in relation to males.

Contrast Two Girls to a Team, The Bechdel Test, Girl Show Ghetto. This is also Distaff Counterpart to The One Guy. See also Smurfette Breakout when the character becomes popular on her own, and Territorial Smurfette when another female is added to the show and the character reacts negatively.

Examples of The Smurfette Principle include: