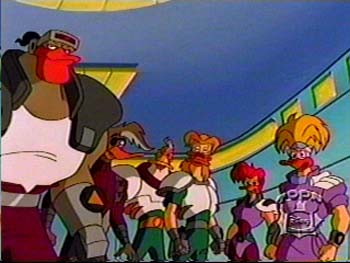 "See if you can keep up with this string of complete illogical nonsense: In 1992, Disney released a slobs vs. snobs comedy about a pee wee hockey league called The Mighty Ducks, in which a group of rag-tag kids came together under the guidance of Emilio Estevez.
"Then in 1993, Disney founded an actual professional hockey team that they also named the Mighty Ducks, and while you'd think they would've filled out the roster with a team of good-hearted but clumsy and disadvantaged youths, they went with the usual professional athletes.


"Then -- and this is where any kind of logic breaks down -- they made an animated series in 1996 called The Mighty Ducks, and despite the fact that they were still making live-action movies, the animated series was about a group of hockey-playing, crime-fighting anthropomorphic ducks that were led by a duck named WILDWING FLASHBLADE. Wildwing. F---ing. Flashblade. And for bonus points, he was voiced by Ian Zeiring."
—Comics Alliance, in a review of a totally different series about hockey-playing superheroes

The Mighty Ducks animated series was, to put it gently, rather a surprise for viewers expecting a comedy series about misfit kids playing hockey. This animated series lasted from September, 1996 to January, 1997.

It was instead about (sit down for this) a team of super-powered anthropomorphic ducks who fight aliens with hockey-themed gadgets. Yes, somewhere in space there were two dinosaur-derived races. Interestingly, the race descended from Ceratopsians, led by Lord Dragaunus, were evil and the Therapod (well, more specifically, duck) descended race was good. By an incredible coincidence, the Ducks' entire culture was based upon hockey.

When the Ducks pursue Lord Dragaunus to Earth, the Ducks form an NHL team where they can hide in plain sight. Their arena, known only as "The Pond", has a hockey rink that doubles as a landing pad for the Aerowing above and has an HQ below. The Ducks and Dragaunus continue their fight, although there are other villains that sometimes challenge the Ducks.

Despite being ducks created by Disney, they are not part of the Disney Duck Canon. One would be intrigued to see Scrooge's reaction to these guys...

Tropes used in The Mighty Ducks (animation) include:
Retrieved from "https://allthetropes.org/w/index.php?title=The_Mighty_Ducks_(animation)&oldid=1756048"
Categories: