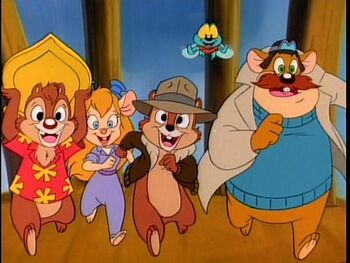 Chip 'n Dale: Rescue Rangers was one of several Animated Series in the syndicated "Disney Afternoon" block of the 1990s. It updated classic Walt Disney characters, much as DuckTales (1987) (the Donald Duck/Uncle Scrooge comic book universe), Tale Spin (Baloo, Louie and Shere Khan from The Jungle Book) and Goof Troop (Goofy and Pete) also did. This one focused on updated versions of the mischievous chipmunks Chip and Dale. Originally, the series was actually going to be about The Rescuers, which would likely have departed from the books in favor of original content. However, when The Rescuers Down Under was green-lit for production, the series was redesigned into the one we all know and love.

Chip and Dale now led a team of crime-fighters called the "Rescue Rangers". The other members are Monterey Jack, or "Monty", a tough but lovable Australian mouse with a weakness for cheese; Gadget Hackwrench, a blonde female mouse who was a skilled inventor and mechanic as well as both chipmunks' (and the Furry Fandom's) unrequited love interest; and Zipper, a small fly (and Monty's best friend) who could not speak understandably, but had unusual strength for his small size. The team lived in a tree in the park and saved the day from a variety of villains.

There was a Nintendo video game adaptation, which was actually pretty good for a licensed game.

Boom! Studios announced a continuation of the series in comic book form which began in December 2010; this followed on the heels of the successful revival of Darkwing Duck as a comic series, which featured a cameo by Gadget in one issue that was likely a foreshadowing of things to come. The comic came to an end after two arcs (eight issues), and there is no word on a future continuation, either by Boom or by Disney-owned Marvel Comics.

Tropes associated with the Boom Studios comic should go here.

Tropes used in Chip 'n Dale Rescue Rangers (animation) include:
Retrieved from "https://allthetropes.org/w/index.php?title=Chip_%27n_Dale_Rescue_Rangers_(animation)&oldid=1900743"
Categories:
Cookies help us deliver our services. By using our services, you agree to our use of cookies.