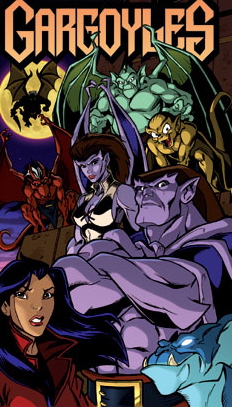 Gargoyles was a rare breed: it was a Western cartoon with a story that followed deliberate arcs and did things very rarely seen in the average Western 'toon. Did we mention that it came from Disney?

The main characters of the series are gargoyles, large winged humanoids (their appearance was vaguely demonic, though saying so is insulting to them) that are extremely (almost literally) nocturnal—they turn to stone, no matter what, when the sun rises. Once, there were many gargoyles, but interactions with humanity have led to their species becoming endangered. The main characters survived purging thanks to a magical spell that made them permanently statues—at least, unless the castle which they were protecting were to ever "rise above the clouds".

One thousand years later, it did. Billionaire David Xanatos (yes, that Xanatos) took the castle from Scotland and transported it brick by brick to the top of his skyscraper in New York City; this broke the curse for good, reviving the dormant gargoyles in a land and time far from their home. He didn't do it for altruistic motives, though; eventually, Xanatos and the clan of gargoyles became enemies. The clan manages to make an ally in New York detective Elisa Maza, however—and with her help, they work to protect their new home while simultaneously adapting to it.

Gargoyles spans fantasy and science-fiction genres, and its plot would eventually involve magic, robots, The Illuminati, god-like fairies, numerous characters straight out of Shakespearean plays, and much more. In general, All Myths Are True in this show.

The show is also famous for the intricacy of its villains and plots. Very few are Card Carrying Villains; in particular, the charismatic and manipulative nature of Xanatos is why the Xanatos Gambit was named after him. Even the heroes are individuals with their own wants and desires that don't always lead to peaceful relationships.

The initial incarnation of the show lasted two seasons and sixty-five episodes. It was followed by a retooled third season -- Gargoyles: The Goliath Chronicles—but since Greg Weisman was only around to write the first episode of this season, a new team of writers who barely had time to familiarize themselves with the show ended up writing the other twelve episodes; as a result, while it was arguably still above average compared to most of its peers in animation, it represented a major drop in quality in both writing and animation. Most fans don't count it as canon (save for the opening episode written by Weisman), and Weisman himself has confirmed that it's not part of the overall continuity.

The series was later resurrected in comic book form in 2006, picking up with an alternate timeline after a comic-book retelling of the opening episode of The Goliath Chronicles before going on to weave an entirely new story; when the company publishing the book were hit with higher licensing fees imposed by Disney, the book was unfortunately cancelled. Greg Weisman has vowed to find a way to continue it.

The show and the universe it created still has an active online fanbase—including the creator.

As a side note: in what became somewhat of an inside joke, many Star Trek: The Next Generation actors had at least cameo roles in the series. Jonathan Frakes and Marina Sirtis played the primary villains Xanatos and Demona; Brent Spiner, Michael Dorn, and Kate Mulgrew all played recurring roles; and the guest stars included Avery Brooks and Colm Meaney.

In the grand tradition of the internet, the show has its own Wiki.

Not to be confused with the 1967 novel by Thomas Bernhard, the 1972 TV film directed by Bill Norton, the Japanese Thrash Metal band, the Big Bad in Nadia: The Secret of Blue Water, or a gargouille.

Gargoyles is the Trope Namer for:
Tropes used in Gargoyles include:

Retrieved from "https://allthetropes.org/w/index.php?title=Gargoyles&oldid=1832162"
Categories:
Cookies help us deliver our services. By using our services, you agree to our use of cookies.