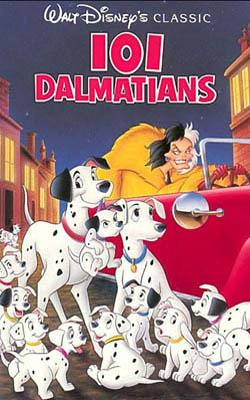 Entry #17 in the Disney Animated Canon. The Hundred and One Dalmatians was adapted for animation by Walt Disney Pictures and it was the second Disney animated film to be set unambiguously in contemporary times. Furthermore, the 1961 production was the first to use xerography to ease the inking process and make a film with this much technical complexity (the 101 dogs and their collective innumerable spots) possible. Unfortunately, this technology became the norm and its limitations trapped all Disney animation into a hard scratchy outline look for 16 years until The Rescuers, which finally was able to use further advancements for allow for a softer look again.

Disney adapted it again into live-action in 1996, casting Glenn Close as Cruella and setting the story in more modern times. The remake was mixed in critical terms, but it turned out such a big monetary profit that it spun off an Animated Series, 101 Dalmatians: The Series, that ran in both Syndication (as part of what remained of The Disney Afternoon) and on Saturday mornings (as part of ABC's One Saturday Morning) in the 1997-98 season. Did we mention it was made by the same studio that made Doug? Then the live-action version got a sequel in 2000, as did the animated version three years later.

The original children's novel is less remembered than the Walt Disney movie based on it. (And it had a sequel, too.)

Tropes used in 101 Dalmatians include:
Retrieved from "https://allthetropes.org/w/index.php?title=101_Dalmatians&oldid=1750911"
Categories: