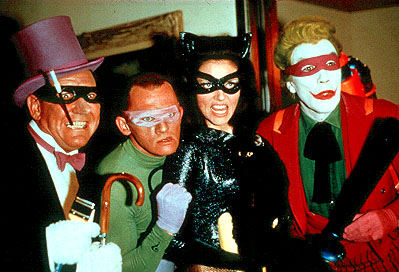 They all met while shopping for masks.

"How do my foes keep finding each other?"

If a Superhero has a Rogues Gallery, it's an obvious plot for the villains to team up. A Villain Team-Up is almost always for the sole purpose of ganging up on a hero or hero team and finishing them off once... and for all!!! Villains will almost never team up to rob a bank together, or commit any other crime together. Which makes sense, because the typical Rogues Gallery has villains with nothing in common at all, other than hating the hero.

This is also why they lose; unlike the heroic team they fight, the villains never trust each other. One of them will betray the rest of the group. Usually after they've captured the heroes, thus letting the heroes escape. Some heroes can even cause a "solid" Villain Team Up to implode with Flaw Exploitation. Other times, one of the villains has planned the whole team-up as a trap from the start. Cue An Aesop about The Power of Friendship. This is one of few situations where maintaining the Status Quo is well Justified.

A variant is that instead of ganging up, they make the heroes Run the Gauntlet. If they get on reasonably well, they'll compliment each other on their evilness. If conditions are right, they may become a Big Bad Duumvirate. While this is usually a one-shot team up, a Legion of Doom is a recurring team of villains and are a major opposition together. Can easily lead to a Joker Jury situation. When done badly can lead to instant Villain Decay, as the hero trashes six people who each used to be a threat to him on their own. This trope is the opposite of Evil Versus Evil. When a villain teams up with the hero, that's Enemy Mine.

Compare Evil Is One Big Happy Family and Legion of Doom.

Examples of Villain Team-Up include:

"I think they're starting their own little town in there, elephants and goblins living together in peace and harmony, joined only by burning hatred for dwarves."