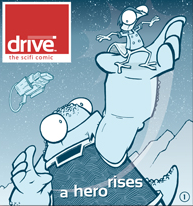 Drive is a scifi webcomic by Dave Kellett, author of Sheldon. It takes place a few hundred years in the future, in which humanity has discovered FTL space travel in the form of the Ring Drive, and has a large intergalactic empire, ruled from Madrid, on Earth. They are at war with mysterious aliens, called the Continuum of Makers, who invented the Ring Drive humans "discovered".

The story mainly follows an amnesiac lizard creature, using the name "Skitter", with an impossible talent for piloting ring ships, which even the Continuum can't match. But we're also shown some of the politics of La Familia, who closely guard the secrets of the Ring Drive in order to keep in power, and the history of a certain individual of the Continuum, which for lack of a name will be referred to as the "Rogue Maker".

Tropes used in Drive (webcomic) include: