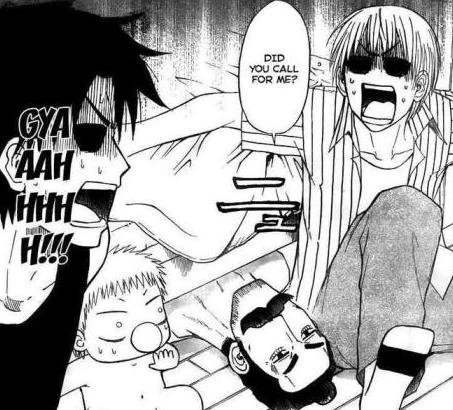 Not what you would want to find under your bed.

When a character either suddenly appears or disappears close to someone when they weren't looking; to start or end a conversation. Maybe they teleported, maybe they used amazing Ninja-like abilities of stealth and concealment, but they're just so good that whoever they're talking to wasn't even aware of it.

An integral part of the Stealth Hi Bye is that not only doesn't the character see the actual entrance/exit, but neither does the audience. Often there will be a pan of the room first showing that nobody is there, a close-up of the "victim" and then suddenly there they are.

Mysterious beings will often use the Stealth Hi Bye to disappear as soon as the person they're talking to looks away, possibly because a third party comes into the room. (The third party will never see the person engaging the Stealth Hi Bye.) There will always be some minor distraction making the "victim" glance away for a second, even if they're familiar with someone doing this.

Occasionally, will be pulled off in such a way as to make it appear that the one pulling off the Stealth Hi Bye is still in view of the other person.

This tendency is usually not really explained, but common possible interpretations would be a character who is able to teleport/turn invisible or else moves very quietly and/or quickly. Although to some extent this ability can be used in Real Life, most of the time this ability is exaggerated to the point where it is an example of very soft/implausible SF, and at times relies heavily on the Rule of Cool in order to avoid breaking Willing Suspension of Disbelief.

Compare Offscreen Teleportation, Offscreen Reality Warp, No Peripheral Vision, Smoke Out, Vehicle Vanish. Contrast Dynamic Entry, which is all about calling attention to yourself.

Examples of Stealth Hi Bye include:

Retrieved from "https://allthetropes.org/w/index.php?title=Stealth_Hi_Bye&oldid=1808495"
Categories:
Cookies help us deliver our services. By using our services, you agree to our use of cookies.