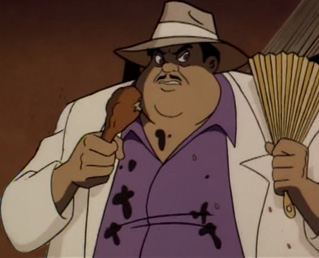 Like Dastardly Whiplash, this is an oddly specific character. Often a villain, or at the very least extremely shady, the Fat Sweaty Southerner in a White Suit is where the Corrupt Hick intersects with the Villainous Glutton. They are always obese. They always speak with a strong Southern accent, normally an upper class drawl. They are almost always dressed in a white suit, cane optional. If it's not truly white, it'll be pale enough to have the same effect. If it's in the deep south like Mississippi or Louisiana, they will be extremely sweaty and constantly dabbing themselves with a handkerchief when not lazily fanning themselves. This is optional in places like Kentucky, but they will occasionally manage to be sweaty even in an Appalachian winter.

The root of the stereotype is in actual Southern fashions, combined with negative stereotypes of plantation owners. The white suit was an enduring fashion in the South until at least the 70s, and can still occasionally be seen to this day. In the Southern heat, a white suit made sense,[1] and looked very fine; keeping it spotless was also a sign of not having to work in the dirt (always a plus for aristocratic types). Examples of real-life people who sported the fashion include Mark Twain and Colonel Sanders (yes, he was a real person). Mark Twain's own satires of Southern aristocracy often portrayed its central figures in this way, such as Col. Grangerford from Huckleberry Finn.

He's normally a shameless glutton, eating fattening foods like gumbo, fried chicken, fried fish, etc, and occasionally takes it to the next level with Jabba Table Manners. Often presents himself in a very laid back manner. If he isn't truly wealthy, then he is at least far better off than the rural poverty that surrounds him. Occasionally you'll meet a version that's not corrupt or might be genuinely heroic. These versions tend to sell food or, oddly, be lawyers.

Examples of Fat Sweaty Southerner in a White Suit include:

Retrieved from "https://allthetropes.org/w/index.php?title=Fat_Sweaty_Southerner_in_a_White_Suit&oldid=1503336"
Categories:
Cookies help us deliver our services. By using our services, you agree to our use of cookies.