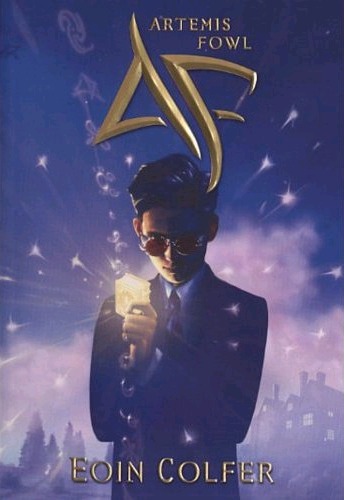 "I believe it's time to let our diminutive friends know exactly who they're dealing with."

A series of novels written by Eoin Colfer.

Originally, the tale of an Irish pubescent evil genius and his efforts to acquire money and power by exploiting the secret underground world of fairies living beneath the world using both magic and advanced supertechnology. In later books in the series, he becomes a more benevolent fellow, working cooperatively with the fairies to curtail human mischief. The series takes cues from suspense, action, "heist" crime films, and James Bond-esque spy movies and transplants them into a modern fantasy setting.

The series currently comprises seven novels; the eighth one is scheduled for July 2012 and is intended to be the last one.

There are also two short stories that are available in the companion book The Artemis Fowl Files, and two graphic novels that appear to form a different canon to the prose (there were other less obvious changes, but one is listed under Race Lift).

Tropes used in Artemis Fowl include:

He then goes on to say that Butler could kill someone in a hundred different ways without his weapons.

Retrieved from "https://allthetropes.org/w/index.php?title=Artemis_Fowl&oldid=1885711"
Categories:
Cookies help us deliver our services. By using our services, you agree to our use of cookies.