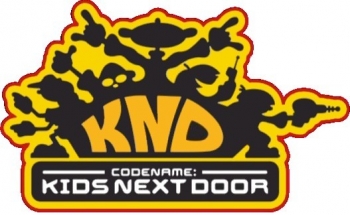 Codename: Kids Next Door (2001-2008) is an original animated series from Cartoon Network about a team of five ten-year-olds who are members of a secret organization that fights adult tyranny. It's much better than it sounds.

The idea grew out of side characters for Mr. Warburton's failed series Kenny and the Chimp. The show featured five kids who lived next door to Kenny with no parental supervision. The five were simply troublemakers who enjoyed terrorizing the neighborhood. When the show fell through, they were retooled into the stars of their own show. The pilot was submitted for Cartoon Network "Big Pick Weekend", where viewers were allowed to vote on the next cartoon series. Kids Next Door reached the final three and was ultimately the winner.

The five kids became Sector V, a Five-Man Band in the worldwide organization known as the Kids Next Door. Numbuh One, The Hero, is a Properly Paranoid Conspiracy Theorist who is always seen wearing sunglasses (and has no hair). Numbuh Two, The Big Guy, is an inventor known for cracking an Incredibly Lame Pun at inappropriate times. Numbuh Three, The Chick, is The Ditz of the team, constantly happy and serving as the team doctor. Numbuh Four, The Lancer, is a Book Dumb kid who holds an invaluable amount of street smarts. Numbuh Five, The Smart Guy, is the only sane girl trying desperately to keep the team together.

Together, the KND of Sector V fight alongside their compatriots-in-childhood against numerous villains -- including the The Delightful Children From Down The Lane (and their creepy father, Father), Numbuh Five's traitorous teenage sister Cree, and the Corrupt Corporate Executive Mr. Boss -- who hate children and want them enslaved.

The show was known for its consistent continuity and its use of the Story Arc, as well as several Parental Bonus moments -- including an Affectionate Parody of the Animatrix short "The Second Renaissance" and a Musical Episode starring, of all bands, GWAR -- that attracted fans outside its intended audience. Another one of the show's big draws was the aversion of the Spotlight-Stealing Squad, Invincible Hero, and Failure Hero tropes; a new episode can actually have suspense over who's going to win or lose, and it's hilarious and/or awesome either way.

Episodes followed a specific naming pattern: the episode title is always "Operation: [X]" -- where [X] is an acronym (as an example: "T.E.E.T.H.") -- and both the acronym itself and the phrase it stood for (using the prior example: "Tooth Extracting Enemy Terrorizes Headquarters") served to give viewers a general idea of the episode's plot.

Kids Next Door ended after six seasons, one movie (Operation: Z.E.R.O.), and a crossover with The Grim Adventures of Billy and Mandy ("The Grim Adventures of the KND"). The Grand Finale, "Operation: I.N.T.E.R.V.I.E.W.S." ("It's Now The Extra Really Very Interesting End Wrap-Up Story"), answered a few questions. There are no DVD box sets, but various episodes have been released on compilation sets.

This show now has a character sheet.

This series has nothing to do with Girl Next Door.

Tropes used in Codename: Kids Next Door include:
Retrieved from "https://allthetropes.org/w/index.php?title=Codename:_Kids_Next_Door&oldid=1937365"
Categories:
Cookies help us deliver our services. By using our services, you agree to our use of cookies.