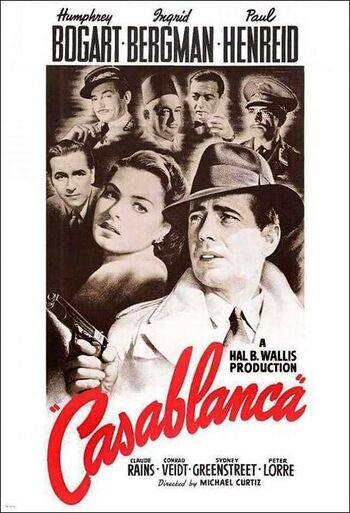 A wartime romantic movie, considered by many to be one of the most romantic (and best) movies ever made.

The 1942 Warner Brothers film Casablanca featured a screenplay by Howard Koch, based on an unproduced play, Everybody Comes to Rick's, by Murray Burnett and Joan Alison; this screenplay was in turn enhanced by the brilliant dialogue of the brothers Julius and Philip Epstein. The film was handed over to ace director Michael Curtiz, and the respected film composer Max Steiner provided the score. Early studio press releases had it that the film would star Ronald Reagan, and Ann Sheridan -- but this was just the studio's publicity department needing to put someone famous's name in the release, otherwise the announcement wouldn't get printed. George Raft also made a play for the lead role, but the studio had always planned the film as an A-list picture and had never considered anyone but Humphrey Bogart for its starring role.

The setting is Casablanca, Morocco in December 1941; the city is a melting-pot hotbed of refugees from Nazi oppression who are all desperately trying to make their way to the United States -- and freedom -- while trying to avoid the Vichy French authorities, their German masters, and opportunistic criminals. At the center of the story is protagonist Rick Blaine (Humphrey Bogart), the bitter, cynical American owner of Rick's Café Americain -- which professes absolute neutrality to all, from the ruthless German commander Major Strasser (Conrad Veidt) and the corrupt, cynical French police chief Louis Renault (Claude Rains) to the desperate refugees and criminals who use his bar as a convenient place for dealings of all kinds.

Rick's claims of neutrality are pushed to the limit by the arrival of Ilsa (Ingrid Bergman) -- the woman who broke Rick's heart when the Germans entered Paris -- and her husband Victor Laszlo (Paul Henreid), a Czech resistance leader and Major Strasser's current favorite target. Ilsa had abandoned him upon learning that her husband, once thought dead, was still alive; now she and Victor need Rick's help in securing vital letters of transit that will allow them to leave the country and continue to fight the good fight against the Nazis. When it is gradually made clear that Ilsa -- despite being with her husband -- still loves Rick, Rick finds himself struggling with his heart, his anger, his gradually-revived sense of idealism, and the question of whether to sacrifice this new chance at happiness for the cause of something that is greater than all of them.

Casablanca was the winner of three Oscars at the 1944 Academy Awards: Best Screenplay (for Howard Koch and Julius and Philip Epstein), Best Director (for Michael Curtiz), and Best Picture. It was also nominated in five other categories, including Best Actor (for Bogart), Best Supporting Actor (for Rains), and Best Score (for Max Steiner).

As an interesting side note: in his World War II espionage history Istanbul Intrigues, historian and political columnist Barry Rubin described the "Byzantine" City of Spies in the title as "a real-life Casablanca".

Not to be confused with the poem Casabianca.

Here's lookin' at you, Tropes.
Retrieved from "https://allthetropes.org/w/index.php?title=Casablanca&oldid=1921764"
Categories:
Cookies help us deliver our services. By using our services, you agree to our use of cookies.