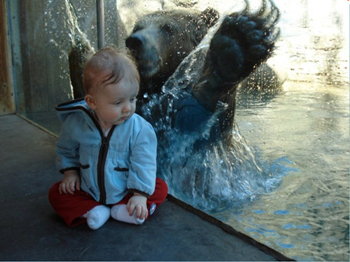 We all know that babies cannot be killed. Many works, especially lighthearted ones, take this a step further and make it so that you can't even depict a baby being scared or disturbed by the scary and disturbing things happening around it. In fact, they'll often be depicted as enjoying whatever's happening, and they giggle and coo while a horrible monster is trying to eat them as they dangle over a pit of lava. Any Badly-Battered Babysitter in charge of these kids, of course, will be freaking out.

This is done because showing a baby screaming and crying in terror would be disturbing to the audience and instantly change the mood of the work, darkening it greatly. So showing the baby literally laughing at danger is a way of reassuring the audience "Don't worry, the baby's fine, we wouldn't go there." It should also be mentioned that babies have True Sight usually because of their innocence. They can see monsters' true forms. They just don't realize that they should be afraid. It's not stupidity so much as lack of life experience.

Examples of Fearless Infant include: