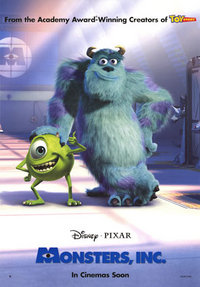 Welcome to Monstropolis, a world where the monsters are just regular folks like you and me. When they hide in your bed/closet/hamper and scare you, it isn't because it gives them any sort of thrill but simply because it's their job. Their world, linked to ours through closet doors, derives all its electrical power from our fear.

Now meet our heroes, James P. "Sulley" Sullivan (John Goodman) and Mike Wazowski (Billy Crystal). Sulley, the big blue one, is one of the best "scarers" in the city. Mike is his partner, best friend, and roommate, who spends his after hours courting the receptionist Celia.

Life is great -- until one of the extremely poisonous fuel sources enters their world and threatens everything. Yes, a human child! Doom-doom-doom! (Actually, she's rather adorable.) Sulley and Mike's friendship becomes increasingly strained as they try to get the little terror back to her world without getting contaminated or arrested. Along the way, they stumble upon a conspiracy that threatens to undermine their life's work -- and possibly their lives.

A prequel has been announced for 2013. Titled Monsters University, the new film will star Mike and Sulley in their college days. Dan Scanlon is set to direct.

Tropes used in Monsters, Inc. include:
Retrieved from "https://allthetropes.org/w/index.php?title=Monsters,_Inc.&oldid=1830562"
Categories:
Cookies help us deliver our services. By using our services, you agree to our use of cookies.