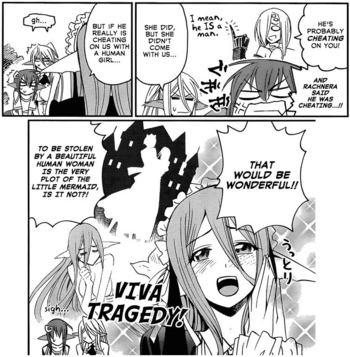 This page is wonderful...It's a tragedy!

Do you really want to know? Of course you do!

Basically, this character is living proof that Nightmare Fuel is subjective. He or she, usually in marked contrast to other characters, is happily intrigued by whatever is strange, dangerous, disturbing, and/or frightening. If this character is the hero or at least "part of the team," his or her fellows will regard him or her somewhat oddly. Indeed, what's Nightmare Fuel or Squick to other characters could very well be Fetish Fuel or Squee to this character. For example, a Nightmare Fetishist may consider Halloween his or her favorite holiday, harbor an obscure or oddly specific kink, think that the monsters he or she's supposed to be fighting are cute, or simply be born with this trait as part of his or her species or family.

If the character is evil, this is a case of Bad Is Good and Good Is Bad.

This kind of person is very difficult to coerce or break through the usual methods; as they can be Too Kinky to Torture or Too Spicy for Yog-Sothoth. Note that this trope is a sliding scale; Nightmare Fetishism can range from a harmless fondness for morbid stories to a literal sexual fascination with the life-threatening.

Chances are good that you are familiar with such a person, whether you know it or not. You may even be one.

Examples of Nightmare Fetishist include:

Retrieved from "https://allthetropes.org/w/index.php?title=Nightmare_Fetishist&oldid=1678899"
Categories:
Cookies help us deliver our services. By using our services, you agree to our use of cookies.